I'm here in Johannesburg (aka Joburg, which is much faster to type) seeing the sites with Crystal before heading off to Madagascar. 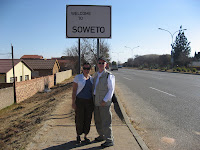 Site 1 - Soweto (aka South West Township) 130 square km (so that's 40 or so miles?) it is huge and home to both rich people with brick houses and 2 car garages, and the very poor people with homes made out of tin and plastic.
We also went to the street where Nelson Mandela used to live and where Desmond Tutu still lives. Mandela's house is now a museum, which guides (who seem rather exasperated by the crowds) take you through and tell you the story of his life.
We also saw a memorial to the students who were killed when they protested the use of Afrikaans as the language they were taught in at schoool. Then we went to the church where they used to gather and where they thought they'd be safe. The police came into the church and shot it up. You can still see the bullet holes today. Other students were kidnapped and killed in rather grusome ways. Our guide said that when the parents found out during the Truth & Reconciliation hearings how their children were killed some of them had heart attacks and died.
In the end South Africa becomes a democratic country. I'm not sure I believe the guide when he said blacks and whites all get together just fine now, no problems. Hmm. How quickly people transition. 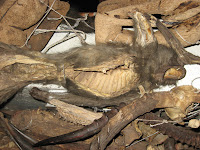 Site 2 - We stopped at a shop, which was also a museum of man and science. It's where traditional healers go to get all their snake skins, bones, roots, etc. for their healings. The picture is probably going to show up sideways. After I took it, I realized it's a monkey. :( 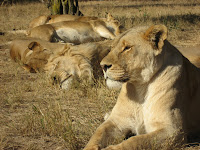 Today we went to lion park and saw, yes lions. We got to play with the cubs at the end of the tour. Very precious, though a bit mangy. Not nearly as soft as your average housecat. We also got to feed some giraffe while we were there. Crystal was brave enough to feed the ostrich. The giraffes just put out a long, black, saliva cover tounge which they wrap around your hand to get the delicious pellets. Gross yet harmless. The ostrich pecks at your hand and bites anything in the vicinity... pellet, finger, you name it. 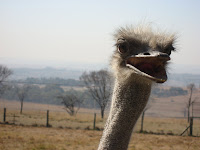 Tomorrow we go to Kruger National Park and then we're off to Madagascar. I haven't done much in the way of the documentary so far, but I've got the rest of the trip ahead of me. 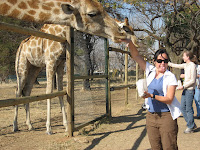 This will probably be it for the next few weeks so enjoy and I'll catch up with you soon.
Posted by Miss K at 6:30 AM

Yo KR, glad to see the update. Love the ostrich picture, cute yet menacing. All is well on the home front.

San Francisco misses you but so glad you had a fabu time in Madagascar, and that you are beaming as ever...