Where in the world do I start to get you caught up?

2004 - Una and I lead a Habitat for Humanity trip to Chile. It is another amazing experience and I become convinced I need to find a way to spread the word about good works that are happening in the world. Habitat

2005 - I buy a video camera and follow Mary Kay to Vietnam, where she is checking on the progress of a school for blind children which is being built with money she fundraised through a non-profit she started. HOPE Project

I put together a 5 minute video for her to use at future speaking engagements. I am struck by something she says when I am interviewing her, "Maybe the message is that you can be one little person from one little area and yet, through your few actions, you can make dramatic change."

I say I will edit the rest of the footage into some watchable Globetrekker-style video. I do not.

2006 - Una and I attend a Habitat leadership training in Americus, Georgia and decide on 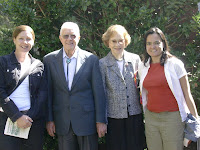 Madagascar as the place we will lead a trip the following summer. The idea of another trip is very exciting and makes me think (again) maybe this is what I should do with my life instead of work in Human Resources.

It is confirmed that in early 2008 my job will be relocating to a city 40 miles and one bridge from my house. I begin considering my options.

2007 - I have been talking with a life coach www.coachchris.com who is helping me with practical things, like making progress on tasks and bigger issues like, answering the question, "why am I here?" and accepting that I can not do everything myself and being open to people who want to help me.

I decide now is as good a time as any to quit my job, plan an extended trip to Africa and bring a video camera in the hopes that I can highlight good work being done around the world and turn it into something - a film, a show I host on the Travel Channel, a series of posts on YouTube - this is all to be determined.

June - As I start taking concrete action towards what I want to do... support comes spiraling in.

And that's where I am. Right now, I should be recording a video diary on my progress. I should be trying to see if I can fit everything I intend to bring in my backpack. I should be taking my car to get a smog check. The list goes on. Some tasks I will save for Tuesday, some I will go do in a minute.

Stay tuned... I don't know where this is going, but it's pretty exciting!
Posted by Miss K at 9:25 AM

Email ThisBlogThis!Share to TwitterShare to FacebookShare to Pinterest
Labels: Dream