How many of the five lands on the Ligurian Sea can you see in 24 hours? If you're John and me you can see three. Well, two and a half.

After Pisa we caught a train to Monterosso, the northern most town of the famed five. The beaches were covered with sunbathers blanket to blanket and chair to chair. We went to check in to our Airbnb and were given a hotel room before getting it straightened out and moving to our apartment. Once settled we went out for a stroll along the water with several stops for drinks, snacks and people watching before heading into the old part of town for dinner.

The scene is like you imagine. Houses painted in varying shades of yellow, pink and salmon, green shutters and cobblestone streets. We did two loops of old town making our decision of where to eat based on who was open Sunday and had space outside for two spontaneous diners. I had gnocchi with prawns that seemed to be 90% head and legs and John got branzino which the waitress filleted tableside.

After our meal we walked to a wine bar where I got a lemon spritz, 3 parts prosecco and 1 part limoncello. They grow lemons in these parts so how could I resist? While we were there, the annual parade of drunk, singing fisherman celebrating the lemon harvest stopped to serenade us. Not sure if that's *exactly* what was going on but the proprietor said it was fisherman, gave them a bottle of wine and danced with them. They were wearing lemon peels on their glasses and took their singing to the church piazza where it turned into a giant dance party, which we joined for awhile. What a treat!

This morning we got coffee in Monterosso then caught the ferry to Vernazza. Hoo boy, what a zoo! There were multiple tour groups following their respective guides around, people spilling out of every trinket and gelato shop and the rocky beach full of swimmers. Also, tons of people had trekking poles here. Mostly folded up because they had finished trekking in to town but whatever, I felt seen.

We walked around town, made some choices - based on crazy steep staircases - to stay near the water and beat the crowd to an outside table for lunch. I had Tarife (a pasta typical for the area) with pesto. It was a huge bowl but so delicious I ate it all. John took a quick dip in the sea and we got on the ferry to Riomaggiore.

The southernmost, and steepest, of the towns, by the time we arrived we realized we needed to find a cab and get to the station for our train to Florence. After 10 min of walking up hill and realizing we'd never find a place to catch a cab, we hobbled (okay I hobbled) to the tiny train station to get a train to the bigger station. That's why it only gets half credit. With only 3 min to transfer platforms, I'm happy to say we caught our train to Florence. No running necessary.

Though the pictures of Cinque Terre may not do it justice, when I get off this train and back "home" to Florence and the speedy wifi I'll post some. 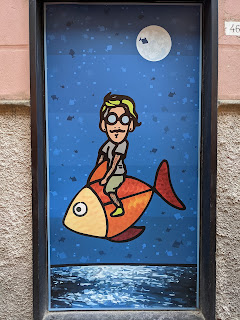 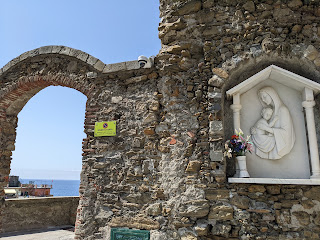 I'm on a train heading to Monterosso, one of the five cities in the famed Cinque Terre. It's my 6th train of the trip and the first time anyone checked my ticket. Glad I keep buying them.

After a delayed departure from Florence we arrived at the Stazione Pisa Centrale where me, John and 80% of the people on the train got off. While my knee is improving, we opted to take a taxi to the Field of Miracles rather than walk 25 min.

Once again, I'm walking past rows of souvenir vendors to what appears to be an entrance and BAM! That's the Leaning Tower of Pisa leaning right in front of us. It's a bit surreal to see iconic structures like this, the Taj Mahal or the Pyramids of Giza in person and I feel lucky to have done so.

Back to Pisa... of course we joined the game of lining up our photos so it looks like we're holding the tower up. How could we not?

We went in to the Duomo to have a look and heard some music, which filled up the cavernous space. Then it was people watching and snacks until it was time to head back to the train. We had enough time to walk to a giant Keith Haring mural he painted in Pisa in 1989. Unexpectedly wonderful.

We're in Cinque Terre tonight and tomorrow and you know you will hear all about it. Fortunately for you, the internet in Monterosso is pretty slow so I will not upload pictures of the tower from every possible angle and distance.

We started with brunch at Caffè Gilli, in business since 1733. Yes, 1733. John practiced his Italian with the waitress and I figured out a plan to take the train on Sunday to Pisa,  then Monterosso. We'll spend the night there, tour the Cinque Terre and head back to Florence by train Monday. We just booked an Airbnb on the water so it looks like last minute coordination is possible!

On the way back home from Caffè Gilli, we stopped at an exhibit where the artist took a data set of  thousands of paintings from the 14th to 17th centuries and used artificial intelligence to create a "hallucinating" interpretation of Italian Renaissance art. Trippy. 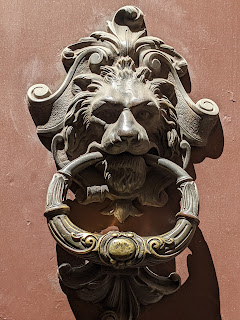 Happy Feel Good Friday! I'm traveling for the next few weeks and will be tapping in to the FGF archives for stories. Join me as we look back at some favorites from the last 9 and a half years.

Located in Richmond, California, their motto is "Treat yourself. Transform Lives." Why? Because they employ people who need a second chance, whether that's because they've done time in jail or have had issues with substance abuse.

The short version of the story is this. Rubicon Bakery was founded in 1993 as a social enterprise by Rubicon Programs to provide job training skills and employment to low-income clients in their program who were the hardest to employ. After 16 years, with the bakery losing money and down to 14 employees, they sold it to Andrew Stoloff, who promised to continue the bakery's mission.

Now they have over 100 employees, are growing at a rate of 30% per year and their products (made with all natural ingredients) can be found in stores around the country, including your local Whole Foods! You can meet some of the bakers and hear how working at Rubicon Bakery has changed their lives in this 3:50 minute video. You can also read this Berkeleyside article by Alix Wall which gives you a much more detailed version of the story and includes photos!

That leads us to the second Feel Good Friday group, Rubicon Programs.

As explained on their Facebook page, "Rubicon's mission is to transform East Bay communities by equipping low-income people to break the cycle of poverty. Since 1973, Rubicon has provided employment, housing, mental health and other supportive services to individuals who are very low-income, especially people who are homeless or have mental illness."

Their programs include a one stop career center that provides workshops, coaching and job placement assistance as well as a host of legal services. They also operate a fully licensed landscape maintenance and installation business called Rubicon Landscape, which provides training and employment to a team of 60-80 people.

You can support the work of both groups by buying some cupcakes, hiring help for your yard work and following them on social media! Remember, treat yourself. Transform lives.

A Peek in the Pitti Palace

We are getting in to our Italian groove. We started the morning with pastries from a place down the block, then stopped at the doctor to get an all clear on the knee and directions to a farmacia for a knee sleeve, pain reliever and ice pack. After that good news, some pictures at the Duomo, and stopping back at the apartment to put on my sleeve, we headed out to lunch and the Pitti Palace.

If people from Berkeley opened a cafe in Florence, Carduccio would be it. I had a salmon poke bowl (delicious) and admired all the organic food for sale. While we were eating, a man who was walking down the street with a bench put it down on the sidewalk and then began chatting to all the passersby. That's one way to pass the time.

On to the Pitti Palace, former Medici residence turned museum. The theme of the rooms in the royal apartments is... over the top. It's made me realize I am not maximizing the use of my wall and ceiling space to display art. None of us are.

After the art, we strolled out to the Boboli gardens to sit in the shade. It hit a high of 87 degrees today (much higher than I packed for) so after some time watching the people go by, we've come back to the house for our late afternoon rest and icing the knee before going out again. The loose plan as of now is to take the train to Siena tomorrow. Let's see what happens! 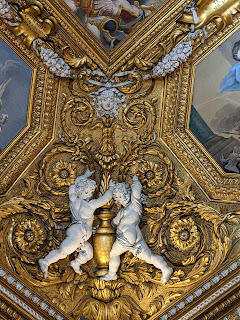 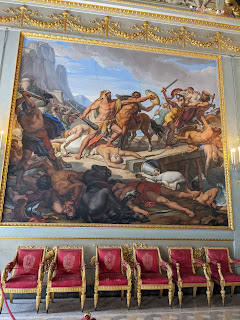 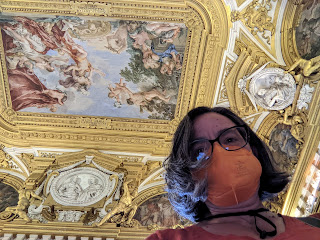 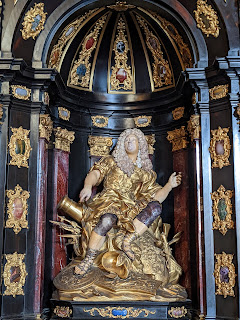 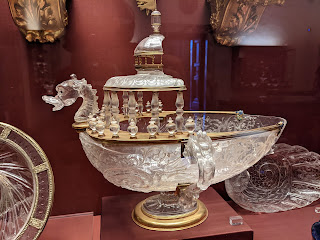 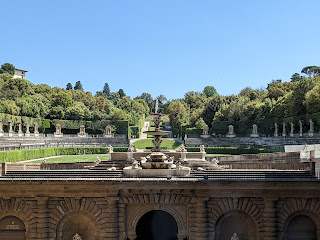 Day at the Uffizi

It was our first full day in Florence and we started it off with a trip to the Uffizi Gallery.
Ace bandage on and trekking pole/cane at my side, John and I spent the morning at the Uffizi dialing in the numbers for the audio guide and learning more about the art than we will ever remember.
At some point it becomes an overwhelming amount of busts, statues and Madonna and child paintings but that's interspersed with paintings you recognize like Federico da Montefeltro (check the photo below), Caravaggio's Medusa on a shield and Botticelli's Birth of Venus.
Museums are meant for strolling and that's what we did. Fortunately there were plenty of benches for resting and elevators to take you from floor to floor. We left and promptly found a restaurant for some more resting, now with food and wine!
A stroll to the clinic led us to discover that you can no longer do walk-ins and have to call ahead but they are closed at the moment so will try to book an appointment later today. The good news is I have more mobility than yesterday and kneemageddon seems to be heading in a positive direction.
As for the photos below, I'll write what it is if I remember but I didn't take pictures of any of the descriptions and it's been 35 years since art history class so this is less for educational and more for enjoyment purposes. 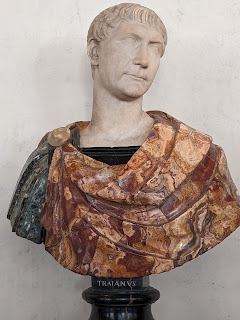 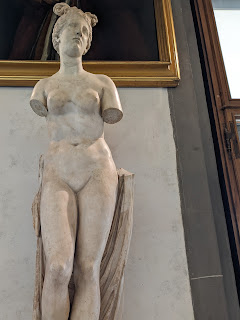