Yes, it's been awhile since the festival but I've still got my name badge as evidence I was there! That and a handy wine opener - the perfect film festival souvenir (when your festival is in wine country, that is).

Here's how it all went down. Edmondo and I

drove up to Sonoma at the crack of dawn on Saturday morning, getting there in time to
see the first screening of Behind the Bush at 9:30am.
The film was well received, lots of laughing at the right parts and questions afterwards like "who is the real bushman"? The other short docs in our program were well done. Nice to be in such good company.

After some chatting with the other filmmakers, we met our host who was putting us up in her guest house in Glen Ellen and high tailed it to our fabulous digs. There was a pool, hot tub and a friendly dog named Buddy who came out to welcome us. All this 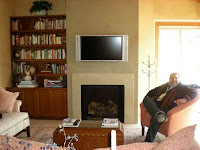 and snacks in the kitchen? We had to lounge around a bit before heading back into Sonoma to find our Scary Cow peeps.
After foolishly (foolishly!) buying some lunch we caught up with Anton, Erin, Chris and Scott only to find out our passes got us into the back area of the tent which was full of free food AND wine and margaritas! Well, at least now we knew how it could be...

Off to a documentary on Vince Guaraldi (think Charlie Brown Christmas) that was interesting but waaaay to long and then to see Susan Sarandon get a lifetime achievement award. Too bad for her the interviewer was so lame. For the most part, you could tell this was not the first bad interview she'd had to sit through in her career but at one point she couldn't take his rambling anymore and finally snipped "What are you asking me?!"

Back to Glen Ellen to change... off to another party (guess we got there too late to see Susan, doesn't she know fashionably late means after me?) Not only were we too late for Susan, we were too late for the food. But a taco truck on Hwy 12 called La Bamba solved that issue. The food was good but we had to wait 45 minutes to get it. At 11:45 at night! I think La Bamba should open up taco truck numero dos. Though I guess we waited so the joke's on us. 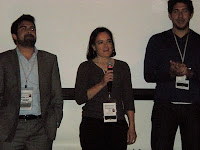 More movies, a final party and the last of the free wine and by 10:15pm we were on the road back home. Our film didn't win any awards there but I'm very happy that it made it into the festival. The question now is... what other festivals should I enter??
Posted by Miss K at 5:13 PM No comments:

Well, you know, the Bushman isn't going but I am and so is my film, "Behind the Bush"!

The short documentary film about the bushmen of Fisherman's Wharf that premiered at the Castro Theater in February is going to the Sonoma International Film Festival! It will screen as part of the short documentary program on the morning of Saturday, April 9th and the afternoon of Sunday, April 10th.

My co-director and co-producer Alison is on the verge of having a baby so I'll be making the road trip with
our editor, Edmondo. Another Scary Cow film is going to be at the festival so we will be doing our best to represent the herd.
It's one thing to get recognition within the Scary Cow community and it's another fabulous thing to get recognition outside the community! Arrangements are being made to get us passes to the festival.

From what I understand our passes will get us into all the movies and all the events except the Susan Sarandon tribute where they give her a lifetime achievement award and then screen "Thelma and Louise". Really? Fine. If I have to put T&L in my Netflix queue and then make up entertaining anecdotes to share as if I was Susan Sarandon, I will. I really will.
In the meantime, I've got to work on some of the logistics for the road trip, get my act together and practice my schmoozing. I most definitely want to be schmoozing at the top of my game when Susan comes over and asks me how it was I met all these bushmen!