As promised, I’m spending the next few Feel Good Fridays focused on voter education and election-related organizations. For all of us feeling sadness, fear or anger right now (or for the last four years), I have a lovely antidote – action.

Vote Forward is a nonprofit organization that builds tools “to enable Americans, wherever they may be, to encourage fellow citizens to participate in our democracy.” Their mission is “to empower grassroots volunteers to help register voters from under-represented demographics and encourage them to vote.”

It began in 2017 as an experiment by Scott Forman during the special election for U.S. Senate in Alabama. Using a randomized, controlled trial he found that turnout among people who received get out the vote (GOTV) letters was 3.9 percent higher than for turnout in the control group. That was a big enough success for Scott and some friends to build the Vote Forward platform. As he explains, “we believe our democracy depends on everyone participating, so we volunteered our time and expertise to achieve that goal.”

So how does it work? You can watch this short video or keep reading.

Start by going to the Vote Forward website and clicking the link to “send letters”. Fill out a short form and get approved within 48 hours. Once confirmed, decide whether you want to send 5 or 20 letters (you can always go back for more) and either let the randomizer send you names or pick a state to target from this list of social campaigns. 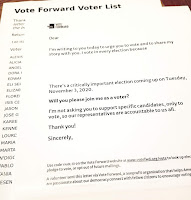 I chose the randomizer and now have the names and addresses of 20 registered voters in Florida! Next step is to print out the letters (or go to your local copy shop), add a personal note and wait until the send date of October 17th to pop them in the mail. If you’re wondering why October 17th, Vote Forward found there is a sweet spot for GOTV letters, not too soon and not too late. You can read the full explanation and get mailing tips here.

Are you ready to join me? Vote Forward set a goal of sending out 10 million voter turnout letters in 2020 and the current count is 8.23 million. I got my list of voters on Thursday and I already feel better even though all I’ve done so far is print out the letters and buy stamps.

If you don’t have time to write, please consider a donation to Vote Forward and help them meet their goal of 10 million letters by spreading the word on social media. Like their Facebook page and follow them on Twitter @votefwd.

With US elections coming up in less than two months, we’re going to spend the next few Feel Good Fridays focused on voter education and election-related organizations, beginning with the Voto Latino Foundation. 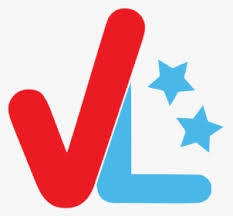 Started in 2005, Voto Latino is “a grassroots political organization focused on educating and empowering a new generation of Latinx voters, as well as creating a more robust and inclusive democracy.” With 32 million Latinx people eligible to vote in 2020, Voto Latino has a goal of registering 500,000 new voters before the November elections. As of this posting, they’re halfway there!

The Voto Latino website is full of resources, and starts by answering the question, why vote? Vote to elect candidates that care about the same issues you do, to get Latinx representation in politics and to create an inclusive, accountable government. And if those reasons aren’t enough, Rep. Alexandria Ocasio-Cortez would like a word. Watch AOC here.

Once inspired, Voto Latino helps people get ready to vote by providing information on registration, early voting, mail-in ballots and voting rights. They also explain why knowledge is power. “In addition to knowing your rights, it’s a good idea to familiarize yourself with common voter suppression tactics. Remember – if our votes didn’t matter, they wouldn’t be trying so hard to silence us.”

If you’d like to support the work of Voto Latino you can get involved by organizing a virtual event, registering friends and family to vote or becoming a volunteer. You can also make a donation and spread the word on social media by liking the Voto Latino Facebook page and following them on Twitter @votolatino.

Let’s all get registered and ready to vote!

As I write this Feel Good Friday post, there are hundreds of fires burning in the western United States and thousands of firefighters working to contain them. Given this situation and the fact that it’s September 11th, it seems like a great day to profile the National Fallen Firefighters Foundation.

Fire service programs provided by the NFFF include a set of initiatives to prevent line-of-duty deaths called Everyone Goes Home, a community risk reduction program that encourages the public to be proactive in fire safety, and a network for fire chiefs to support each other and share information.

Resources for families of fallen firefighters include virtual support groups and self-care and wellness videos. Full family programs range from bereavement camps for children to financial assistance for post-secondary education and access to the fire hero family network.

To honor and remember fallen fire heroes, every October, the National Fire Academy in Emmitsburg, Maryland hosts the official national tribute to all firefighters who died in the line of duty during the previous year. This year, in lieu of an in person gathering, a National Tribute to Honor America’s Fallen Firefighters will be broadcast on October 4th at 10:00am EDT.

Other events that support National Fallen Firefighters Foundation include golf tournaments, racing events and 9/11 Memorial Stair Climbs that honor the FDNY firefighters who gave their lives on September 11th, 2001. Today’s event is virtual, and the money raised helps the NFFF create and maintain the programs that support fire service survivors.

If you’d like to support the work of NFFF you can make a donation, shop for gear and share the love on social media by liking their Facebook page and following them on Twitter @NFFF_News.

It's the Feel Good Friday before Labor Day so we're celebrating an organization that supports women's labor, the 9to5 National Association for Working Women.

As summarized on their Twitter page, 9to5 is “building a movement for economic justice by engaging directly affected women to get their issues on the public agenda.” Founded in 1973 by a group of female office workers in Boston, 9to5 is “one of the largest, most respected national membership organizations of working women in the U.S.”

There are four 9to5 chapters across the country (California, Colorado, Georgia, Wisconsin) and a national network with members in every state. While chapters focus on specific initiatives relevant for working women in their states, programs on the national level fall into one of four areas:

Equal opportunity - On average, women earn only 80 cents for every dollar earned by men and those numbers are lower for women of color. 9to5 is fighting for fair pay laws, equal opportunity policies and protection against workplace harassment.

Work family flexibility - 9to5 believes there should be jobs that allow women the flexibility they need to care for their families. That’s why they’re advocating for paid sick days, more accessible family and medical leave, and equitable pay and benefits for part-time workers.

All of this organizing and participation has paid off. Some of the major national policies 9to5 has worked for and won include: the 1978 Pregnancy Discrimination Act, the Civil Rights Act of 1991, the Family Medical Leave Act and the Lilly Ledbetter Fair Pay Act.

9to5 won’t stop until they achieve their vision of full economic equality for women. Ready to join the fight? Make a donation and spread the word on social media by liking the 9to5 Facebook page and following them on Twitter @9to5org.

And since it’s been in your head the whole time you were reading this… here. You’re welcome.