As they explain on their website, "Burning Man is an annual event and a thriving year-round culture. The event takes place the week leading up to and including Labor Day, in Nevada's Black Rock Desert. The Burning Man organization (Black Rock City LLC) creates the infrastructure of Black Rock City, wherein attendees (or "participants") dedicate themselves to the spirit of the community, art, self-expression, and self-reliance. They depart one week later, leaving no trace."

BWB takes its name from Doctors Without Borders and has a similar mission of providing help around the world. From the website, "BWB promotes activities around the globe that support a community's inherent capacity to thrive by encouraging innovative approaches to disaster relief and grassroots initiatives that make a positive impact.

It started in 2005 when some burners (Burning Man participants) went to Biloxi, Mississippi to help rebuild a Vietnamese temple that had been destroyed by Hurricane Katrina. Volunteers continue to provide disaster relief, helping people in the Philippines rebuild after Typhoon Halyon and people in Colorado rebuild after the recent floods. Some examples of their support for community initiatives include fundraising for maternity clinics in Nicaragua and sending post Burning Man bikes to Namibia with Bicycles for Humanity. You can see a full list of their projects here and find out how to get involved.

BRAF was also founded by burners with the mission to "support and promote community, interactive art and civic participation". More from their website on how they work - "Through our Grants to Artists and Civic Arts programs, BRAF works with communities in the Bay Area and around the world to collaboratively produce innovative, relevant and pioneering works of public art that build community and empower individuals."

This includes providing grants and fiscal sponsorship for artists bringing their work to Burning Man as well as public displays of art outside of Nevada. People living in San Francisco may remember the recent interactive monkey piece outside the Exploratorium or be familiar with the rotating art pieces along the Embarcadero at Pier 14. All brought to you by BRAF.

I've got to get back to packing and preparing for the big event so I will leave you to enjoy the art.

See you in two weeks!

It's been a sad week with the sudden passing of Robin Williams. As more people fill social media with memories of their favorite Robin Williams' films, I wanted to make today's Feel Good Friday about an organization he supported for many years -  Comic Relief.

Comic Relief USA was a non-profit organization "created in 1986 by comedy writer, producer and actor, Bob Zmuda, to raise funds to help those in need." From what I can tell on the website, they have not been active since 2010 but I remember many a fundraising show hosted by Robin Williams, Whoopi Goldberg and Billy Crystal. Why shouldn't laughter be a way to help people in need?

For their 20th anniversary in 2006, they raised money for the people of New Orleans who had been affected by Hurricane Katrina. You can watch a clip of Robin's standup from a 1987 Comic Relief show here.

While the US organization seems to be no more, the UK version of Comic Relief, which got its start a year earlier in 1985, is still going strong!

Like its US counterpart, Comic Relief raises money to fund projects that help people in need. You can go to this interactive map to see exactly what they're doing. International organizations they support work on issues such as climate change, people affected by HIV and AIDS and people affected by conflict. Domestically they support issues related to mental health, young people and alcohol and using sport for change.

Since 1988, Comic Relief has celebrated Red Nose Day. From the website, "It's the one day, every two years, when people across the land can get together and do something funny for money at home, school and work." Doing something funny and wearing a red nose sounds like fun, but then what? "Comic Relief spends the money raised by Red Nose Day to help people living tough lives across the UK and Africa." Kind of makes you want to get a red nose, doesn't it?

Despite the fact that sad things happen in the world , there is always something positive going on and finding those stories is what Feel Good Friday is all about. Thank you for following and supporting us!

It's Feel Good Friday and time to shine a light on a great project that brings light to maternity wards in developing countries!

First some statistics from the WE CARE Solar website. "Maternal mortality worldwide accounts for 300,000 deaths a year; 99 percent of those occur in underdeveloped countries."

Dr. Laura Stachel, co-founder of WE CARE Solar, went to Nigeria in 2008 to study ways to lower maternal mortality. She discovered that lack of reliable electricity was a huge problem which impaired maternal and surgical care and often resulted in patient death. She contacted her husband and energy educator, Hal Aronson, who created a portable solution using solar panels to power LED lights, headlamps and walkie talkies. She brought this "solar suitcase" back to Nigeria where it was well received as having the potential to save lives. 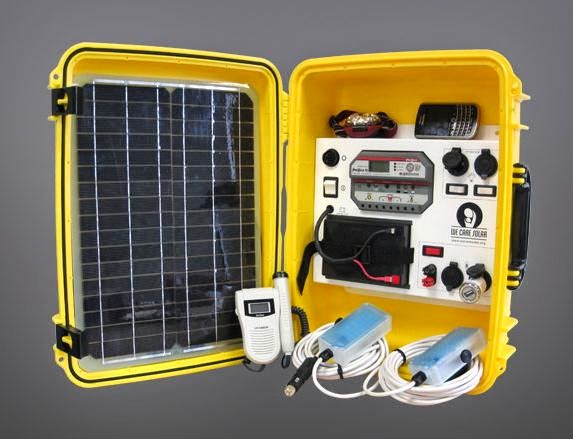 Together, Dr. Satchel and her husband founded WE CARE Solar. Their mission, as explained on the website, is "seeking to improve maternal health care delivery and thereby reduce the number of women who die in childbirth or pregnancy in the developing world."

To date, "approximately 300 Solar Suitcases have been assembled and sent to 25 countries around the world." You can go to this interactive map to see how many suitcases are in each country and what the impact of having them has been.

Dr. Satchel was recently celebrated as a CNN Hero for her work bringing solar suitcases to clinics around the world. You can read the article on CNN and watch a video about the project here. For more photos and videos visit their Facebook page and follow them on Twitter @wecaresolar - let there be light!

Today, we revisit a popular topic on this blog -  the homeless. Of course I don't mean popular because we love it, but popular because it is a big issue that many organizations are working on.

This time, we go to RainCity Housing in Vancouver to see what they're doing to fulfill their vision of "a home for every person".

You may have seen the recent online article by Take Part about bus benches that convert to shelters for the  homeless. This is only one of the innovative solutions RainCity provides! 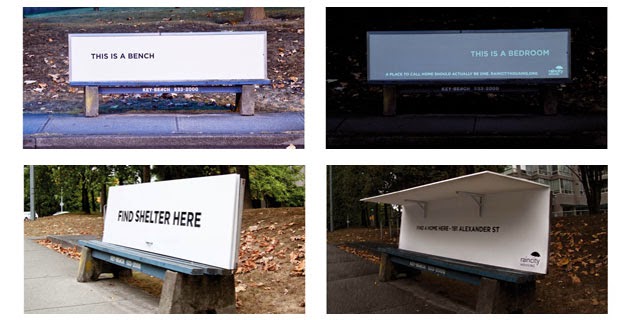 As they state on their website, "The homeless are not homogenous. By offering a variety of housing and support options, RainCity Housing can ensure that appropriate, supportive environments are available to our clients." These environments include emergency, transitional and long term housing. They also have housing designed to meet the unique needs women and people living with mental illness, addiction or other health challenges.

Although their focus is "housing first" other services provided include community outreach to the chronically homeless, food support and life skills classes on issues such as medication administration and money management.

Statistics from their site show that last year alone
Individual success stories are published at this link on their website and you can watch their Open Your Heart News Videos here. As always, to keep most current, like them on Facebook or follow them on Twitter @raincityhsg.