And the Beat Goes On

Being in San Diego earlier this month and meeting the other people who will be in the documentary film was a wonderful thing.

First off, I got to catch up with my old roommate, Ramon! Although he is quite happy living in San Diego... I'm still sad not to have him as a buddy to see bad performance art with. But in San Francisco, there is a never ending supply of bad performance art and friends you can convince to go with you (at least one time). But I digress. 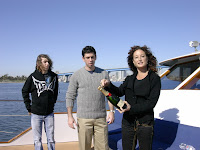 Our first full day in San Diego was spent sailing around on a yacht and drinking champagne - while being filmed and trying to act casual. It was a beautiful, sunny day and a great way to get to know each other before the hard work of Friday. Seriously.

Friday was spent sitting at a round table (after a visit to the make up artist and the sound crew for our microphones) trying to ignore the four cameras that captured our every move while discussing questions like, "how do you recognize the dream that you're going to follow and what do you do if you don't get support"? Good lord. All th 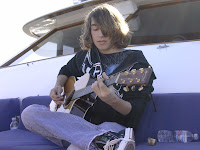 is while trying to make sure that no one looked at the cameras - which were surrounding us, really - and that we gave each other a relatively equal amount of time to talk, though it shouldn't seem like we were going in any order. Do I hear the make up artist telling us to sit in her chair because we're getting shiny?

The other people involved in this project are an interesting lot: a guitar player who dreams of rock stardom, a dean who wrote a play for children about divided groups coming together, two women (with a website under construction) who are working to educate people on the importance of banking your infant's umbilical cord blood and finally the man (also under construction) who 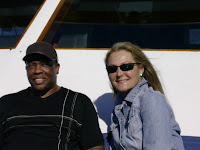 started it all - the soon to be finished documentary movie . If he has his way, we'll all be on Oprah talking about the film.

Hearing what everyone else had done made me feel a bit like a slacker and vow to get back on track when I got back up to San Francisco. Slowly I'm doing just that. I'm starting to edit the video again, I'm learning about how one improves a blog, I'm reaching out to the connections people are giving me and I'm trying to clarify what in the world it is I'm trying to do in the first place. All that and I've joined the Netflix revolution - so I can rent documentaries - for research. Come on.

The movie should be finished sometime in August and then will be premiered in all the cities where there are cast members. To save yourself a trip to Tucson, why don't you plan on seeing it in San Francisco. Either that or Tivo Oprah.

See you in the movies,
Miss K

Hey All,
The screening last month was a big success!  The room at the Bay Area Video Coalition was packed full of people who watched some of my early comedy and film projects before we got to the main event of the African stories.
Featured that evening were stories about the Mazingira Monkey Project, UniquEco Designs, the Boomu Women's Group and Habitat for Humanity.  People in the audience were a big help filling out a brief (I thought) survey to help me figure out how to make the stories better.
On top of that, as a group, we ordered 30 toys from the Mazingira Monkey Project - which is somewhere between 3 and 6 months worth of work for Juma and his wife!
The next day was spent with the director of the documentary film "Dream" and yet another film crew running around San Francisco and answering questions .  I'm getting quite used to having microphones taped to my shirt, strapped to my leg or clipped to my pants.
All good to know, you think to yourselves, but what's this about San Diego?
Everyone from the cast of this documentary film is being flown to San Diego tomorrow as a combination "thank you for being in our film" and one last opportunity to film.  It will be the first time any of us have met each other and I'm looking forward to finding out who these other people are and what their dreams are all about.
After that, the idea is... finish the film by the end of the summer, have a premier in San Francisco (and other cities where they have cast members), then take it on the film festival circuit and ultimately get in on television!  I will certainly let everyone know when the movie will be showing in SF so that if you're local - or close enough - you can attend.
I'll check in again when I return from San Diego.  It's also my goal to get some of the videos posted on the internet before the month is over so, as always... stay tuned.
Miss K
Posted by Miss K at 10:21 AM No comments: