Zipping Through the Redwoods

I've been doing the segway tours for so long now that when someone is nervous, I work with them to get comfortable with the machine so they have a great time but, quite frankly, I'd forgotten what it feels like to be nervous to try something new.

That is until I went ziplining with Sonoma Canopy Tours in Occidental with some friends from UCSB. I had to be talked into it but figured it's good to do things that scare you every now and then. I knew that it would be safe and my fear was not of falling off the line. I just don't enjoy being so high up in the air traveling at 30 mph!

The guides were funny and making jokes to put people at ease - it is a universal trait we share. After practicing on a line about 6 feet off the ground, we drove up to the starting point to zip out to the first of 7 tree platforms.

One guide, Jamie, goes out first so she can signal you when to break and pull you up to the tree and unhook you. The other guide, Zach, goes last because he's the one hooking you to the line and sending you on your way.

Just when I start having a good time, it's over and we have to repel 80 feet to get to the forest floor. The worst part was the anticipation and having to swing out over the platform so you would be facing the tree. Ah! 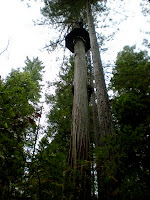 Would I do it again? Yes. Would I spend so much time nervous talking and shouting out swear words? No.

I spent all day trying to upload the videos but faced numerous problems I could not overcome. If you really want to see them, I can make it happen. Suffice to say it was scary then fabulous then scary then fabulous - but that's mostly because by then it was over.