It’s the last Feel Good Friday during Pride month so today’s focus is on an organization helping LGBTQ youth, The Trevor Project.

The Trevor Project has been in the news recently after NFL player Carl Nassib came out as gay and announced he was making $100k donation to the organization. If you’re not familiar with their work, The Trevor Project is “the leading national organization providing crisis intervention and suicide prevention services to lesbian, gay, bisexual, transgender, queer & questioning (LGBTQ) young people under 25."

As stated in their 2020 Annual Report there are “more than 1.8 million LGBTQ young people who seriously consider suicide in the U.S. each year.” That’s why the mission of The Trevor Project is “to end suicide among LGBTQ youth”.

The organization was founded in 1998 by the creators of the short film Trevor, a coming-of-age story of a gay teen set in 1981. The same night the film premiered on HBO in 1998, the filmmakers launched The TREVOR Lifeline, the first national crisis intervention and suicide prevention hotline for LGBTQ youth.

Since then, the programs of The Trevor Project have expanded to include: 24/7 crisis services via phone, text and chat; peer support through a social networking community; research to help improve services offered and advocate for change; education and public awareness programs; and advocacy at the federal, state, and local levels to fight for policies and laws that protect LGBTQ youth.

In Fiscal year 2020, volunteers with The Trevor Project have served over 150,000 youth through the crisis hotline, text and chat, and TrevorSpace.org has over 300,000 users. The organization also conducted the largest mental health survey of LGBTQ youth in the nation while the research team stayed active publishing research briefs and peer-reviewed journal articles. The Trevor Project’s goal for upcoming years is to serve 1.8 million crisis contacts every year.

If you’d like to support LGBTQ youth during Pride month, or any other time of year, there are several ways you can get involved. Become a volunteer crisis counselor, make a donation, and support The Trevor Project on social media by liking their Facebook page and following them on Twitter @TrevorProject and Instagram@trevorproject.

Posting one more Tahoe-related Feel Good Friday before I head home and highlighting the work of SOS Outreach.

Founded in 1993 as the Snowboard Outreach Society, the original purpose of this Colorado-based organization was to improve negative perception of snowboard culture. They began by taking 15 kids from Denver to Vail Mountain and teaching them to snowboard.

In the 28 years since, SOS Outreach has grown into a national nonprofit with offices in 15 locations, including both South and North Lake Tahoe. Their programs “combine outdoor exploration, positive adult mentorship, leadership skills and community service to help youth discover joy, feel included, overcome challenges, improve their mental health, and become strong leaders.” Their vision is “to make sure every kid we meet gets stronger”.

The programs run by SOS Outreach are structured in three phases. Phase one is for youth in grades 4-12. It begins with an introduction to skiing or snowboarding and the core values of “courage, discipline, integrity, wisdom, compassion, and humility.” Phase two is a 4-year mentor program where groups of 3 to 5 participants are matched up with an adult mentor and a peer mentor. They continue the outdoor activities and add a focus on peer bonding, life skills and leadership development. Phase three is an option for interested youth to become peer mentors and continue developing their leadership skills. There are also summer programs such as rock-climbing and backpacking that teach basic wilderness travel skills along with the core values.

Since they began 28 years ago, SOS Outreach volunteers have worked with over 70,000 kids at 22 mountains in 9 states. To hear directly from participants about how this has changed them, you can watch this short video.

If you’d like to help young people gain confidence and leadership skills by spending time in the great outdoors, there are many ways you can support SOS Outreach. Make a donation, become a volunteer and amplify their message on social media by liking their Facebook page and following them on Instagram.

Today’s Feel Good Friday comes to you on location from Lake Tahoe! Three years ago we profiled the League to Save Lake Tahoe – the organization behind the Keep Tahoe Blue campaign - so today we’re going to turn our attention from the lake and focus on the animals. 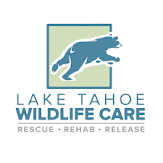 Since 1978, Lake Tahoe Wildlife Care (LTWC) has been fulfilling their mission to “rescue, rehabilitate, and release” orphaned and injured wildlife. They also educate the community about the health and safety of the wildlife in the Lake Tahoe area.

In 2015, LTWC opened a new 27-acre site with a state-of-the-art animal care facility which allows them to care for and release more injured and orphaned animals. Reasons animals come to LTWC can include wildfires, car accidents, predation from pets and other consequences of human activity. All of the animals receive food that is as close as possible to their natural diet as the intention is to treat the animals for their injuries and return them back to the wild.

A sampling of the animals LTWC cares for includes: bears, beavers, coyotes, eagles, owls, porcupines, rabbits, raccoons, river otters and skunks! You can see the full list here. The animals are cared for by rehabilitation staff and trained volunteers. Given the frequency of wildfires in California, LTWC has become a leader in treating animals burned in wildfires.

Since the beginning, LTWC has cared for more than 24,000 animals and released over 15,000 back to the wild - a 63% release rate! LTWC also provides information on how to co-exist with wildlife in the area. From tips on sealing woodpecker holes in your house to where to buy coyote rollers for your fence, you can find all the co-existing and reporting information you need at this link.

If you’d like to help Lake Tahoe Wildlife Care with their mission to rescue, rehabilitate and release wildlife there are several ways to do so. Volunteer your time, donate your money, shop for art and merchandise and support them on social media. Like their Facebook page and follow them on Instagram and Twitter @LTWCRescue.

June is LGBTQ Pride Month so the focus of today’s Feel Good Friday is an organization that works with Black Trans people, The Okra Project.

Founded in December 2018 by Ianne Fields Stewart, the original intention of The Okra Project was “alleviating some of the loneliness Black Trans people can experience during the holiday season” by delivering home-cooked meals. After raising $6,000 in three days, she knew there was interest in making this more than a temporary event.

Based in New York and serving people in New York, New Jersey and Philadelphia, The Okra Project's mission is “to hire Black trans staff to visit the homes of Black trans people in need to cook healthy, home-cooked, and culturally specific meals." This 6-minute video gives a great overview.

The inspiration for the organization’s name is explained on the website, “During the Middle Passage, our African ancestors snuck okra onto captive ships to sustain themselves and plant in the new world. Black Diasporic cooking traditions often use the okra plant for its versatility and it is often associated with health, prosperity, and community.”