As Native American Heritage Month comes to a close, take a Feel Good Friday moment to find out whose land you’re on by visiting Native Land Digital.

Created in 2015 by Victor Temprano, and incorporated as a Canadian not-for-profit organization in 2018, Native Land Digital is a website dedicated to helping people across the world learn more about their local Indigenous history. They do this by mapping Indigenous territories, treaties, and languages with the goal of bringing awareness to both Indigenous and non-Indigenous people.

In their own words, “we strive to map Indigenous lands in a way that changes, challenges, and improves the way people see history and the present day. We hope to strengthen the spiritual bonds that people have with the land, its people, and its meaning.”

You can input your location on the map to find out whose land you’re on, what languages were/are spoken and what treaty was used to take that land for the U.S. government. While there is a very visible Indigenous community in my neighborhood - headquarters for the Native American Health Center, a monthly Indigenous Red Market, graffiti reminding us “this is Ohlone land” - I didn’t know many specifics. After using the Native Land map I learned that I live on territories of the Ohlone, Muwekma and Confederated Villages of Lisjan. The language spoken is Ohlone and the area is covered by the treaty, Cession 281.

In addition to the map, Native Land provides a Teacher’s Guide, a guide to Territory Acknowledgement, a blog, and other educational content in an effort to “correct the way people speak about colonialism and indigeneity, and to encourage territory awareness in everyday speech and action.” If you want to know whose land you’re on while you’re on the move, be sure to download the Native Land mobile app. 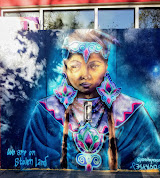 If you want to support the work of Native Land, you can make a donation and amplify their message on social media. Like the Native Land Facebook page and follow them on Twitter and Instagram @nativelandnet. We are ALL on #NativeLand
Posted by Miss K at 9:00 AM