Hello My Friends!
First of all, thanks to everyone who offered to wire money. You'll be happy to know that I found a bank that will give me cash from my credit card (for a small fee). I'm stocked up for awhile and know that this is an option if I can't find an ATM that works for me.

Note: this ended up being a long one so... since it is Friday morning for most of y'all, I suggest getting a cup of coffee before you start reading this.

Someone please tell me why, when I'm not much of a trekker, why I think I can go trekking the 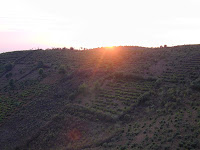 minute I leave town?? And a question for the runners... do you think 16km is about 20 miles? If it is more tell me, if I am confused and it is less, don't tell me because I am amazed I hiked that far. But I am already ahead of myself.

So, Wednesday, Sarah the guide and I catch a 2 hour bus to Menghai, bus stop of the trough. For the boys who have complained about the trough at the Eagle, I now feel your pain. Imagine you go into a bathroom and there is a trough on each side. Step up and get situated so everything lines up the way it's supposed to and you don't fall through. While you have a little wall sheilding you from your neighbor on the side... there is nothing to keep you from seeing the person across from you. Except, I suppose, that you are supposed to be facing sideways. I have never gone to the bathroom so fast in my life. I'm sorry everyone in China has to talk about the bathrooms and spitting. Someone from a 2nd story spit on my arm tonight. The only thing that made up for it is I had this chicken (white meat, no bones) and ginger stir fry at a Thai restaurant for only $1.00. $1.50 if you count the soda. 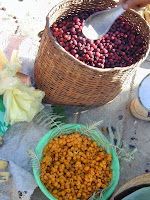 So, then it's a bone jarring bus ride to Xiding – a one yak town if ever there was one. We get a room at the guesthouse, which is also the bus stop, and go to the restaurant in town for some fried pork and fried potatoes. Yum.

Afterwards we go walking around the mountains, which are covered with tea bushes, and Sarah starts playing her flute. It was all rather lovely, though she's not very good but I'm sure that fact will be romanticized away in time. Then, as the sun was setting, we started picking these little orange berries and eating them. They were yummy.

After the lights were off, every noise I heard, I was convinced the market was starting and it 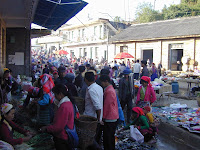 was time to get up. Knocking on another door, talking, tractor going up the hill, the whipping sound of someone convincing an animal to go up the hill. Between that and the hard as concrete bed, I didn't sleep much. Finally about 7:30 we got up and went to the middle of town (about 10 feet from the outskirts of town).

What had been an empty plaza the night before was now filled to the brim with people. Most of the people were Dai (the majority minority group down here) while others were Aini (who are Anka if you and they are in Thailand). The Aini women either had a red and white scarf on their head OR this fully decked out metal Grace Jones kind of headdress 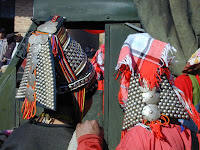 Mostly for sale was food. Vegetables, potatoes, honeycomb complete with bees, fish in a pile some still flopping, and pork sitting in the sun and cut to order. There were also shoes, shampoo, music, etc. for sale.

I ended up buying some bananas from this old woman who then sat me down in her seat and when I started trying to sell her bananas to passers buy, started giving me tea leaves, some fruit that was I don't know what and telling me that this fabric I bought could be used to make a 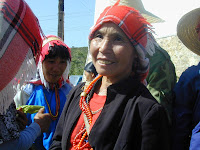 purse like all the women had or a jacket or these leg warmers that they all wear. I started taking pictures with the digital camera, then with the polaroid... lordy it all broke loose with everyone wanting their picture. It was totally fun. Then the woman took my hand and started leading me around the market showing me what I could buy to eat and where to find a purse. She hugged me goodbye when we left.

And leave we did... after lunch, we began a 4 hour 16km hike. From 12-4... I'm convinced the hottest worst time of the day. Sarah started seeming more and more like David Carradine's kung fu character. She's got a shaved head and was wearing this little cone hat and she would just walk and walk and walk. Was I dead on the trail behind her? She don't know. I was not pleased. 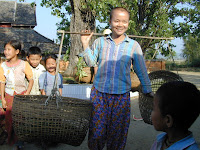 At the top of the mountain, I was commenting on the lovely view and taking pictures of the valley... I didn't realize we were going to hike down into it! At one point, she decided to try a different route. This one went along the side of the mountain, through a field of banana trees (which was good because they were the only thing that stopped us from sliding all the way down) across a goat trail and finally to some flat land.

I must say, though. Once we finally got down there, it was like how you imagine China should be. Fields of sugar cane and rice with people farming them, yaks tied up to pole benefitting us all somehow with their chewin' and pooin'. We walked to this Dai village and when we got there Sarah realized that this wasn't the one she was aiming for. Fantastic. Now where do we sleep? 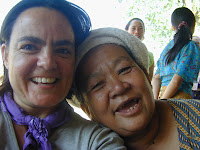 In China nothing is done right away, there seems to be a lot of beating around the bush. So, we hung out at this shop where little kids were laying on the pool table and the traveling doctor had pulled up her chair and was examining people as they came in from the fields.

Evenutally, Sarah started chatting this one lady up and that led to another and so on and so on. The breaking point was when an older lady (who wanted me to know she was 66) came up to me and said "Hello". Then she mimed that the berries I had just eaten would give me (from the looks and sound of it) explosive diarreah. Hooray. But now the miming and joking was on and soon the camera was out. It turns out, I was the first foreigner who had come through their village - and what a c 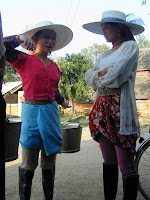 ommotion. Pretty soon, there was the age exchange, more joking and a miming frenzy.

Just so you know, the fashion, if you want to be first on your block to have it... Easter bonnets and gold teeth. The gold teeth seem to be mostly the older women.... the other older women don't have so

many teeth. And younger women seem to sport the Easter bonnets. Walking down the road, going to the store, working with the rice. Every day is Easter here.

We ended up staying with a family who had the traditional Dai house... wooden house on stilts with you in the top and the pigs and chickens living below you. No wonder why most of the flus start in China. They did have a recent addition of concrete which is where we slept - hot but no rats! 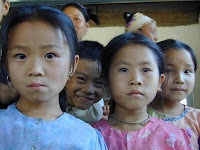 remember is that 5 is ha and 6 is ho) I heard a banging and looked out the window. Papa was grabbing at an eel that was sliding across the floor and then banging it's head against a bowl where his brother lay already knocked out. Hmmm, I thought.

Later, we go into the stick house for dinner. I see the bowl with the eels which are now sliced open and covered in blood. Anyone going to rinse those off? No. Mama is going to take some stuffing that she just chopped up, put in in the flayed eel, bend it in half and tie it with bamboo. Then it's off to be deep fried in pork fat! How I wish I didn't see that. I 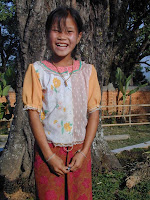 convinced myself that if boling water kills germs, boiling oil must do wonders. It was actually tasty. It certainly was fresh. There was also some sour, hot green I don't know what, some beef, pickled radish and boiled cabbage. And lots of rice. It was good but I only ate a little as I was scarred by the woman's miming earlier in the day.

At 6:30 the next morning everyone was up and we had some sticky rice with many of last nights dishes plus fried up little fish (which I just couldn't eat) and fried pork skin (which I tried but I'll stick with potato chips). Even though the food was not my usual selection, it was amazing how hospitable these people were considering they didn't know us a few hours before we were in their home. The woman now has taped on her window a few polaroid pictures and a postcard of Chinatown.

We left and were going to have to walk 1.5 hours to the next town to catch a bus but two of the girls from the village gave us a ride on the back of their bikes. You have to let her get a running start then try to run up and jump on the back over the wheel and sit sideways. Now I landed wrong and my butt was too far forward so I was holding up my legs and using my backpack to try to balance. It was like doing a giant situp... but better than walking. After awhile, we had to get off. We walked some and then got a ride in the back of a truck - most excellent.

We came back this afternoon and I spent all afternoon walking around in the blazing heat getting my money and buying a plane ticket to go to Lijiang tomorrow. Though now I hear from Mary Kay and a travel agent in Kunming that all travel to Lijiang is banned and the sights will be closed. I'm in the same province so I think I can fly there but what will I do? Plus, if travel from province to province is banned, I don't know how Mary Kay and I will meet or how I will get out of Yunnan. More and more I feel like Patricia Arquette in that movie where she was in Burma and mostly she laid around looking hot and miserable and every now and then she looked at border guards wishing she could leave - that's all I remember but it's starting to be how I feel. I'll figure something out. 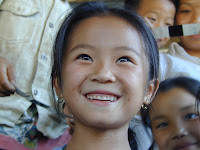 Oh, also. When you ask someone a question and the answer is "yes". No one says yes, they say "uh" or sometimes "uh, uh, uh" if they are trying to tell you, "yes, yes, that's it exactly".

So there you have it. Thanks for listening, thanks for writing back and I'll catch you with part 5 from Lijiang.