Well, I got to Lijiang on Saturday night and went to get a room at a place I read about in a guidebook and I was told... we have rooms but we're not allowed to rent them to foreigners. Fortunately, I met a girl on the street who had a guesthouse and I was able to stay there on Saturday.

Sunday morning, I went walking around the Old Town as it was scheduled to close down any minute. It's got all these canals running through it and is home to the Naxi people. Imagine little wrinkled old ladies in blue Mao hats and blue skirts carrying baskets of whatever walking down cobblestone streets. Now mix in a little Fisherman's Wharf and you've got the picture.

When I went back to the guesthouse at 11:30.. I was told the police had come by and I basically 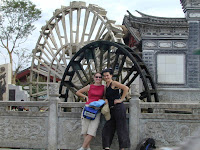 had until 3:00pm to get outta Dodge because they would be swooping through again to make sure there were no foreigners (as we are now being pegged as the chief spreaders of SARS). There were only two hotels in the new town that would take us.

I went back to a cafe to eat before I had to leave and ended up meeting these two Australian women who saved me. They are living in Lijiang and speak Chinese. Long story short, we got me checked into one of the hotels and then all went on a bike ride. At 8000 ft. I was going pretty slow. We ended up going to one of the few restaurants that was open and belting out "My Heart Will Go On" from the Titanic while we ate... it was quite a moment.

I spent yesterday rearranging my plane tickets, going to the Black Dragon Pool Park (very scenic and nice without so many people) and then meeting the Aussies and some other people for some Sichuan hotpot. Basically put some boiling hot liquid on the table and then dump your food in it to cook. 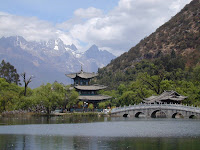 Today I am in Kunming at a hostel Mary Kay recommended. The Aussies suggested I go to a different place but when I got there the guy asked for my passport. When he saw I was from Meiguo (that means beautiful country and USA) he told me they were booked. I asked if they were booked because I was Meiguo. He said no, we're booked. Then you could have told me that before you knew where I was from. Then he said... government regulations because of SARS. 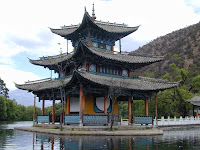 So basically, I'm headed to Guilin tomorrow to meet Mary Kay and after that everything is flexible.

I am healthy and being careful and will let you know what happens.

Talk to you again soon.