I have arrived and I am fine. I'm hanging out in Mary Kay's apartment while she finishes school. When she's back it's yoga, food and massages!

The flight to Korea was only 12 hours, a nice surprise, as I was thinking it was much longer. 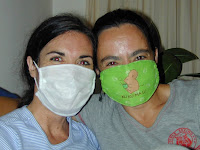 Fairly uneventful and few face masks at this point.

After 4 hours of walking all over the airport, sleeping on the chairs, changing money and reading magazines, we finally left for Guangzhou. Some of the flight attendants were wearing masks and they handed them out to everyone on the plane. I would say 1/5 of people wore them... until we were ready to deplane. Then about 1/3 of people put them on, including me.

As I was filling out my quarrantine form, I contemplated checking the box saying I was having trouble breathing because I was. Not anything SARS related... wearing the facemask was like trying to breathe through a maxi pad. With wings! By the time I got to baggage claim, I was fogging up my own glasses and giving myself a heart attack so I took it off. I will try the ones I brought along... they don't seem so upsetting. 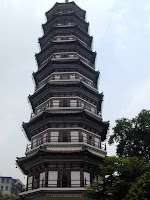 ng from every balcony, without exception, like so many wind chimes. I tried not to pay attention to the driving, though I did notice that my cab was going faster than the ambulance. I've made a mental note on how to transport myself to a hospital.

The Clifford Estates are a bit of a plastic bubble separated from the giant city. Mary Kay's apartment is tiny but fabu. I'm about to find out how fabu her shower is.

So, until I have something more interesting to say, just know that I arrived and all is well.