It Takes a Village

Or in this case, the town of Sicignano degli Alburni.
Let's set the stage. Before I left for Italy, I got some basic info from a cousin on the towns where our grandparents grew up. Both are near Salerno, and since I was going to end the hiking tour close by I was sure I could get to these towns. So sure I didn't really make any plans to do so.
I did realize, while on the hiking tour, that I should book a place in Salerno as step one. I found a cute B&B that looked pretty central and booked Sunday through Wednesday.
When I checked in Geni, the owner, asked me if I had a project and I told him I hoped visit the towns where my grandparents were born - Calvanico (grandfather) and Sicignano (grandmother). He gave me the same look I got from the woman at the train station in Rome all those weeks ago. A look that says, "Um, you're trying to do what??"
He explained that neither place was easy to reach by bus and said he would make some calls to see if he could find a driver for hire. Later that day, he told me Constantino would be able to take me to both towns on Tuesday and warned that he doesn't speak any English. Seemed like my only option so I said yes and was in front of the B&B Tuesday morning at the appointed time.
Imagine my surprise when Geni rolled up in his car. He told me that Constantino tested positive for Covid and couldn't drive me but Geni didn't want to tell me no when I had travelled so far so he rearranged his day so he could take me!
It worked out for the best - well not for Constantino. Geni and I had some interesting conversations in the car. We talked about meditation and mindfulness, improv, Italian culture and tacos. Even better, when we got to the locations, he acted as part detective, part interpreter.
In Sicignano we started with a visit to a castle at the top of the hill. It was closed so we took pictures, admired the view, and walked back down the hill to find some people. We saw a nameplate on a house that said Carnevale (my grandmother's maiden name) and he asked a group of people standing around about the Carnevale family. There was a lot of talk, advice to go to the municipal building to pull records, and a conclusion that we needed to find Giovanni.
More walking and we stopped in a bar for a caffe before we hit the road. Geni mentioned our situation to the bartender and before I knew it, he was calling Giovanni on the phone while two other men came in to add info, opinions and give me Giovanni's number. We were told he lives in Salerno but wasn't coming back until Wednesday, the day I had to catch a train to Rome. As we left for Calvanico, Geni said people in the town will be talking about this for days. Based on the size of the town, I believe that is true.
I thought Sicignano was small, until we rolled in to Calvanico. Everything there was closed so we walked around and talked to a pharmacist who said there are no more Ruggieris in Calvanico. It was still great to see imagining that my grandfather, his sisters and his parents were running around on those same streets 100 years ago.
Back in Salerno Geni dropped me off at the B&B and later that day I sent Giovanni a message on WhatsApp. I was able to use Google translate and discovered that he was coming back from Positano that night and was available to meet for dinner at 8pm!
Giovanni and his wife Enza came to my B&B to pick me up and we walked through the streets asking each other questions. Are we related? Yes. How exactly? I'm not sure. Giovanni and his wife only spoke Italian and, while I could understand about 85% of what they were saying, where exactly the cousins connect is still a mystery.
We had a lovely dinner and then walked down to the water for gelato at Bar Netuno - the best in Salerno. While they spoke Italian, I spoke my trademarked Span-tal-ish. Many of my sentences started with Spanish switched to Italian when I realized what I was doing and ended in English when I couldn't think of the word in the other two languages. It all worked surprisingly well.
All of this happened yesterday and I'm still a bit in shock that, with the loosest of plans and limited information, I found a relative in Italy and we were able to meet in person.
While I wish I hadn't twisted my knee early on, overall this trip has been pretty spectacular.
One more meal in Rome, a 5am wake up call, a final train ride, two planes and a Lyft and I'll be home! I'm looking forward to getting back. 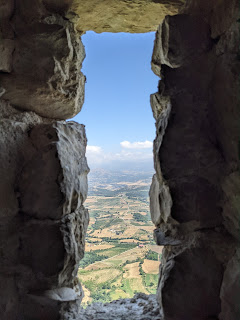 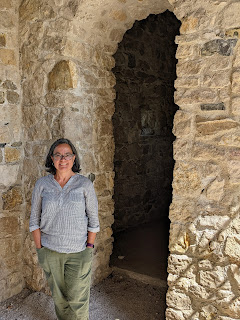 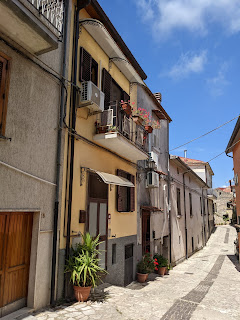 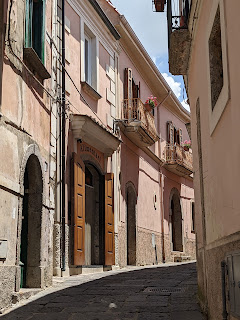