We are not actually ambling in Amalfi we are speed hiking but I'm a fan of alliteration.

As I mentioned in my Facebook posts, since I've joined this tour group there has been a lot of togetherness and I haven't found time to blog. Until today... only because I decided to skip the morning hike and rejoin the group to kayak in the afternoon.

To recap what's been happening, Wednesday we hiked on the Path of the Gods from Agerola to Positano. Technically there was a path but it was rocky and at times the steps were extremely steep. That's why I was so excited to learn there was a bus I could take from the rest stop down to Positano. Three other people in the group followed my lead and the people who did spend the next hour walking down 880 stairs told me I made a smart choice.

Yesterday we took a ferry to the island of Capri. Beautiful as you approach, like the rest of the Amalfi coast it's packed (PACKED) full of tourists even though it's only early June.

Our group hiked up to the main piazza and then continued to Villa Jovis (Jupiter), the ruins of Emperor Tiberius' palace. The ancient ruins are all starting to blur together for me but this had a great view from the top - once you hiked up more stairs.

Group lunch on the way back to the piazza was at a restaurant where the pasta was freshly made. I had a pasta called paccheri, which you can see in the picture below. So delicious!

On our own, some of us took the funicular back down to the beach (something others wish they did after walking down more stairs) and spent the remainder of our time in the water.

As my friend Rick Steves explains, "Amalfi Coast towns are pretty but they're also touristy, congested, and overpriced. Most beaches here are private, pebbly and expensive." This applies to Capri too but it was fun for 90 minutes. That's why I'm glad I'm on a tour where hike away from the touristy bits and we will kayak later today.

That said, I am not the only person who needs a time out from the hiking. Three other people have opted out this morning.

This weekend there will be a regatta, the 66th annual race between the formerly warring cities of Amalfi, Genoa, Pisa and Venice. There is a concert tonight and the fireworks have already started last night. I feel like I'm back in Oakland. Though Oakland doesn't start every morning with a barrage of church bells.

Going to take advantage of my morning off with a true amble about town and will be back here and on Facebook again in a few days. Ciao! 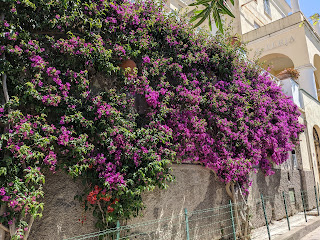 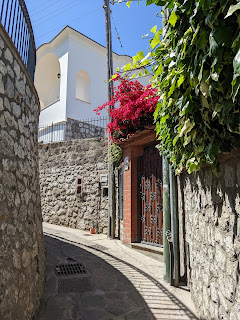 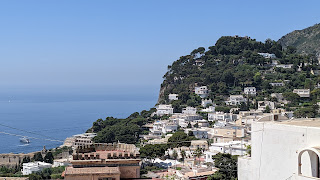 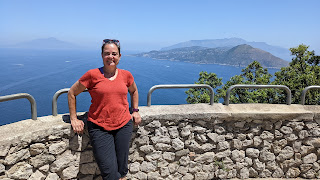 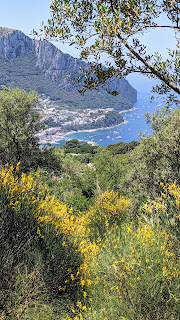