Happy Birthday to Me!

Do you suppose Carly Simon was singing about me? Yes, well, moving on.
Saturday I had a birthday bbq at the Cube.  It was a fun event with family, friends, good food and a pinata shaped in the number "40".  If that's not enough motivation to swing a stick erratically through the air while people stand around and laugh, well then, you're either under 40 or you don't like candy. 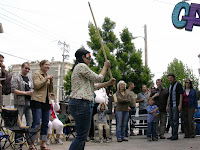 Speaking of candy... I've got plenty left.  And there's tortilla chips and 2.5 pounds of shredded cheese that someone needs to eat. If you find yourself hungry and in my neighborhood, stop by for some food.  If you don't know where I live, well then you'll have to fix your own dinner.
Did the excitement end there, you ask yourselves?  No!  I went to Beach Blanket Babylon with some friends later that night.  It's always a fun show and given the fact it's been 17 years since I've seen it... it was full of new surprises.  Nancy Pelosi singing "Leader of the Pack" with Barbara Boxer and Dianne Feinstein as her backup singers was priceless. 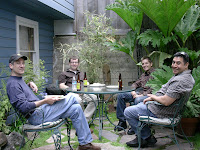 Did the excitement end there, you ask yourselves?  No!  Sunday was the big ol' Pride Parade! Although I got there too late for the Dykes on Bikes kick off (and Charo was a no show), we did see  Cyndi Lauper, a float of Charo drag queen look-a-likes and a whole bunch of proud Marys. I didn't have my camera with me, so you'll have to let the internet be your guide.
The excitement almost ended there, but then I went to my friend Danny's house to play Wii Rock Band!  I am much better at the drums than guitar but that leaves me with nothing but room for improvement!
Okay.  The excitement has ended.  Must now get back on task with this whole figuring out my life thing.  After just one more piece of pinata candy...
Posted by Miss K at 2:41 PM

Email ThisBlogThis!Share to TwitterShare to FacebookShare to Pinterest
Labels: birthday

I recently came across your blog and am enjoying reading on all your travels, so thanks for sharing. Sounds like you had a great birthday! :-) Cheers to you!

Happy Belated Miss K! We still miss you over here in 'automaton' land. Come by again someday and have lunch with us...maybe we can go to Bob's Giant Burger! OK, OK, I'll buy some monkeys if it will entice you over...but I won't sing 'Gloria', maybe Roy will!;-)
Yours, Carrie
PS-One of these days I will come to see one of your shows again, even if I have to lock Thing 1 and Thing 2 in the closet!!!