Toto, I've a feeling we're not in Kansas anymore. 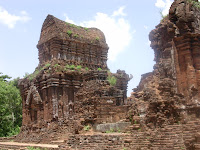 I could not bring myself to schlep into Tokyo at 7:00am after two hours of plane sleep so I've been kickin' it here at the airport. Crashed out in a day room for some horizontal sleep and am now updating the blog. I can't save pictures from here so will add those when I'm back home.

On to our last two days in Hoi An. 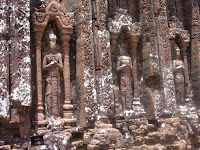 Saturday, we took a tour of My Son, a sacred place of the Champa people back in the 1st through, oh, did he say 6th? century. It's a bit like Macchu Pichu, in that it is ruins that people are still learning about. It is also similar in that hundreds of people are walking around snapping photos and sweating their asses off. Despite the crowds, I managed to lose my group (while I was inside one of the buildings trying to take artsy photos) and wandered around in a semi panic as the person I chose to ask for help was Bob Geldof's French cousin who could only tell me, "In zee end zay all come eere". Frankly that's a longer sentence than I could manage in French, but still it didn't help.

I eventually found them looking at the last of the sites. It had been the grandest of all the

pagodas but was bombed by the Americans in 1969 - yet another reason war sucks. Now it is being painfully restored under the guidance of Unesco. It's hard to recognize the granduer of it now, you can only recognize it's size. Upon our return I power shopped my way through the streets of Hoi An. Back to the cloth market for final fittings and clothing pickup, off to the art gallery to buy a crazy painting that will not fit in my house anywhere and yet I love it so. 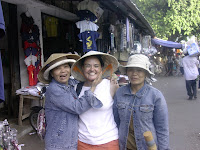 We met two women who said we looked Vietnamese, though it was mostly the hair that had them going... "same same, but different" (seems that phrase has leaked over from Thailand). They gave us bananas from their mother in the market and then charged me too much for

coffee. While most people in Vietnam were very friendly to us, it was hard to tell how much of it was genuine (I know some of it was) and how much was designed to soften us up for a hard sell? I imagine the answer is a little bit of both, but I prefer to think my spending power has nothing to do with it.

In one case, a waitress at a restaurant told me I looked Vietnamese (and what's in it for her to lie?) and then we joked about her helping me pick the lock on our bikes since I was waiting for Mary Kay and our bikes were locked together. When I left, she made me a crane from a beer bottle label. Now that's just precious.

Saturday night, we ate on the balcony of one restaurant overlooking the river watching it all pass by. Tourists out for a stroll, teens out cruising, fishermen on the river with headlamps. Hoi An was a good choice of final cities. 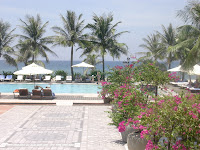 $10 day use fee for their pool and private beach. It was niiiiiiiice.

Mary Kay has two weeks of traveling left and I must come home and see about putting all the footage together to get something she can use to promote her project, and then a record of our trip. 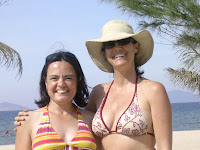 I won't miss the heat and humidity but I am definitely going to miss the coffee. I'm bringing some back, but you might want to wait until I figure out how to make it before accepting a cup.

It' been a pleasure sharing my trip with you. If you ever go to Vietnam, let me know and I'll gladly share details and tips!