(Warning: this is a long one)

You will be thrilled to know that Mary Kay and I have taken a ride on the bus with the loudest horn in all of Vietnam, perhaps even all of Southeast Asia (I will consult with Mr. Guiness upon my return).

We have spent the past few days on a triangle tour, up to Hanoi, over to Halong Bay and then 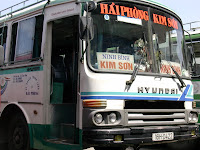 back to Ninh Binh via a local bus we picked up in Hai Phoung. I now know what the soundtrack of my nightmares will sound like. Coming from the tv on the bus, very, very loud Vietnamese music featuring a particularly disonant riff on the Vietnamese version of the sitar. I think we were watching Vietnamese Lawrence Welk show... a little schmoozing with the host, a lot of schmaltzy duets. Punctuate this all with blasts from the horn and you start to have a sense of it all.

I started counting the time between blasts (like the time between thunder and lighting). In the city he honked every two seconds, every 7 at the very least. Sometimes when we got out of town he would go 20-24 seconds without honking. At first I thought, there can't possibly be that many people in our way (the primary reason everyone in Vietnam honks while they drive). Then I realized, we were also advertising for passengers, "Hey (honk, honk) we're going to Ninh Binh (honk, honk, honk). Hey, hey, need a ride?" Can you imagine if MUNI drivers honked that much? "Hey (honk, honk) we're gonig to City Hall (honk, honk)" Lordy.

But you know what? We arrived back in Ninh Binh safely and that's really all that matters. Plus, we ran into Singh (part of the entourage) on the bus. She helped us jump off a stop early and then got us two scooters back to the hotel. 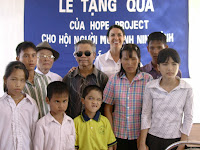 The back of a scooter is my new favorite way to get around, despite the fact that we passed the scene of a fatal scooter accident on the way from Ninh Binh to Hanoi. Now let's get you caught up.

Tuesday afternoon, I guess it was, there was a presentation of the braille typewriters from Mary Kay to the Blind Association. Much speech making and little translation, but it all seemed quite wonderful. I videotaped the whole event even though I'm not sure what was happening. I will have to trade people dinner for some translation help upon my return.

Wednesday morning, we caught a ride to Hanoi with Mr. Le and 4 other people at 6:00am because some relative of his was going to the American embassy to apply for a student visa to study intensive English at UC Davis for a year. Here are some travel tips from Mr. Le (some of 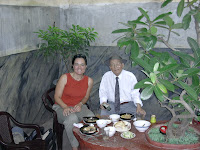 1. Restaurants are dirty. When you use the chopsticks, flip them around and eat from the other end. (I've done that)
2. When you drink from a mug with a handle, drink from the portion right above the handle because no one else does that except Mr. Le and now you.

A travel tip for you if you happen to meet Mr. Le when he is back in California... don't let your mind wander during an extremely long statement. More often than not, it will conclude with the phrase, "I think so. You think so?" and suddenly you have a question on your hands that you are not prepared to answer. 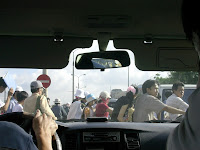 Fortunately, there is so much difficulty with communication, you have that as an excuse and can ask him to repeat.

Hanoi: A very interesting, crowded and fast paced city. The traffic is some of the most confusing I've seen anywhere. There are no such thing as left hand turn signals. When the light turns green, if you want to go left, you just start honking and driving into the oncoming traffic. It's like when marching bands cross in between each other. From the air, I'm sure it looks like Esther Williams swimmers, only less synchronized.

Crossing the street is something that no amount of Frogger can prepare you for. You can not wait for a break in the traffic because there will never be one. What you must do is just start walking into the road, even though scooters and cars are driving right at 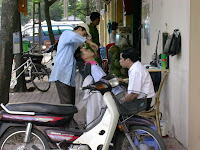 you. The trick is to go at a slow and steady pace so people can honk, judge and manuever around you. Whatever you do, do not flinch, do not stop and never ever go backwards. It works surprisingly well despite the fact you are convinced you will be hit the entire time.

In Hanoi we had breakfast with Mr. Le at Hoan Kiem lake. Prices were clearly a ripoff since we had misters and a lake view. Two eggs with bread and a slice of ham was $1.50. Lest you think I'm kidding, we just got breakfast in Ninh Binh this morning... two eggs, bread and coffee for 3 people $2.50. Wild.

We saw the water puppets in Hanoi. Seemed like a terribly cheesy tourist thing to do (which it is) yet it is quite impressive. 9 people stand behind a screen waist deep in water, and manuever puppets on poles in front of the screen. They act out stories, there are dragons that shoot fire and coordinated dancing. Very cool. 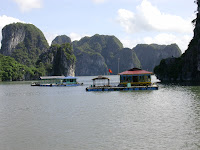 Friday we had our second super cheesy tourist adventure to Halong Bay. A World Heritage Site since 1993, traveling there is a well orchestrated affair. Get on the bus, get on the boat, float out into the bay. Now you will eat lunch, now you will see a cave, now you will swim. It reminds me why I appreciate traveling a bit more independently.

Halong Bay itself is beautiful (and huge). There are several thousand (one person said 1969, one said 3000?) islands that come up out of the water. When you are not being told to swim or eat, you can float around and enjoy the scenery. What was less enjoyable was the heat. 35 degrees celcius, which I'm convinced is over 100 degrees farenheit, 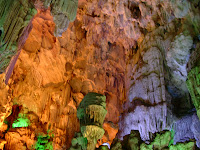 though I can't do temperature conversions in this kind of heat. The cabin was a sweltering sauna. I'm convinced I dropped 30 pounds just trying to lay in there for a few hours. Some people slept on the roof of the boat, but only until it rained.

It was a virtual G8 summit on our boat. England, Germany, Spain, France, Austrailia and us representing for the US. Although there was a karaoke machine on board, people opted to lay around trying not to move and generate any heat which was okay with me.

We also had an Amazing Race moment. In Hanoi, I booked a plane ticket from Danang to Hanoi for the 17th when I'm due to fly out. Yes, the ticket will be here in one day I'm told. The next morning, we were ready to leave for Halong Bay at 7:30am. No ticket. It takes two days. Perhaps we mail it to you in Hoi An? No, that doesn't seem good. Okay, we will have a guide bring it to you in Halong Bay Friday when you leave. It didn't seem like that much coordination was possible, but in fact it worked. Hooray! 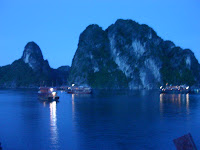 The scenery along the roadsides is pretty amazing. Rice paddies as far as the eye can see full of people in conincal hats hunched over coaxing the rice through every stage of it's growth. Water buffalo being walked by little kids. In the middle of it all, the occasional cemetery or tall skinny building painted very colorfully on the front and left plain concrete on the side.

One thing I don't understand, and then I'll let you go, along a one-mile stretch of road there were pineapple vendors, sometimes only 5 feet apart. Perhaps 20-25 altogether. With that many vendors so close together, how do you decide who to go to and how does anyone make a living? This is really just one of many things I don't understand.

When Mary Kay gets back from her factory tour with Mr. Le, we will go to a market to see what's what. I may need to hose off at the hotel and lay under the fan again, delicate hot house flower that I am.

Thanks for all your messages. I'll write again either from Hue or Hoi An.