Well, I'm back at home and my laundry's in the drier. I am a little distressed that I cannot get my computer to recognize the memory card in my camera. If anyone has ideas of how these 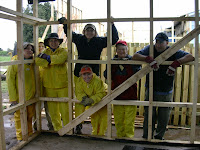 pictures and movies can be saved... feel free to let me know. And now to sum up. (This turned out to be a long one so go get some coffee before you start reading)

I guess I last talked with you before I ate the horse. It was Thursday morning on the site and it was another rainy Temuco day. Given that you don't want the wood for the walls to get wet and our assembly floor was in the field with the cows behind the houses, there wasn't enough work for all of us. I was in the group that opted to go into town, change money run errands etc.

Una, Tracy, Carmen, Dennis and I ran around and then went to a place call Num Num for lunch and ordered hamburgers. We were so obsessed with making sure they didn't put gobs of mayonnaise, none of us thought to ask if the hamburger was made from a cow. It didn't really look or taste like the hamburgers we know 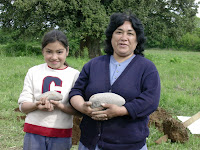 here... all in all it's a topic better not thought of.


Thursday night, the team went out to dinner in Temuco. Always exciting compared to the dorm style food of the Hogar. All in all, however, the food has been fabulous and the meals that Anita whips up for 20 people on the worksite in Barbie's kitchen are amazing.

After dinner (around 11:30) we went to Oba, a club where we were supposed to meet Lorena, the Habitat Coordinator and Paula, the civil engineer, #1 jefa of the worksite. Thursdays are karaoke nights.

Here's the thing, they only let 8 groups sing because it's a big old contest. John, Dennis, Bryan and Gerard sang "New York, New York". Sadly the only working microphone was in the hands of Dennis, the mumbling Australian. While they were in time with each other, they were not with the music. We applaud them for going first.

Terri and I got up to sing "Dancing Queen" complete with moves and everything... we scored an 8. A few more groups from the Habitat gang sang and after some audience voting (where we 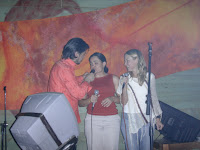 were confused and clapped for our people when the idea was you were clapping for people you wanted to leave) there was a Chilean Idol sing off. One woman sang the national anthem... not fair. A winner was declared and we danced to 80's music from the US until the place closed at 4:00am.

The next trick was getting home. How many people can you fit into a Hyundai? Eight. That's how many. Paula drove us home and waited while we climbed over the gate. This was very helpful as the police came by and she had to talk to them. Thank goodness Jessica was on a project and awake to let us in. I hear the photos will be up on www.oba.cl as of Tuesday... though I didn't see them today. Maybe they were only up until Tuesday?

After 2 hours of sleep on Friday, we went for our final day of work. It was still raining and we paraded around in yellow rainsuits, sitting in houses that had walls and roofs, but no doors, trying to stay dry.

There was a house dedication in the afternoon. Thank goodness Una and I prepared a speech, 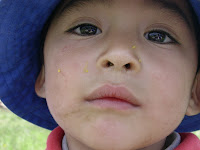 which we had Carmen translate into Spanish ahead of time so we could each translate each other. There were many speakers, a ranting priest and then all the families got Bibles. Finally, off to the ribbon cutting.

Una and I (and the president of Habitat Chile - who knew?) held the scissors together while Lorena ran on the other side to take a photo. The additions we were building seemed so small, but when you walk through from the inside, you see it adds another third to the house. We were both okay until we got to the window at the end and Norma, one of the homeowners and mother of my little amigo Sebastian, was outside waiting for us, crying and telling us she'll never forget us, we'll always be in her heart. Here we go... now Una and I are crying... we walk back out so other people can walk into the addition. Other family members are taking their Bibles around to get all of us who worked with them to write our names inside. It becomes a very humbling snivel-fest.

Little Javier, as opposed to big Javier of the tattoos, asks me to take his picture with the 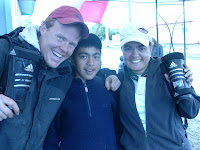 polaroid camera. I do and he comes back moments later to give me his shin guard with his name written on it and his picture stuck on the front. It's a momento from him to me. Precious pookie.

Back to the Hogar for showers and the family celebration... in short, much food, much dancing and much more crying. Omar, one of the maestros and the one whose catchprase "perfesto, correcto, exacto" became the theme for our trip got everyone going. He said God made him fat, ugly and charming and that's the way it is. He wanted to be sure that we only kept the good memories from this trip and buried the bad,then he told us to go back to our families and tell them that he has asked God to bless us all. Then he started singing in the most beautiful, resonant voice. Lordy. Javier of the tattoos started crying so much he had to go into the kitchen, which made Una cry so much she had to go upstairs. It's amazing what kind of connections you can make and how powerful these trips can be when they're only two weeks.

After dinner, the team converged in the space where we meet to do our morning reflections. It w 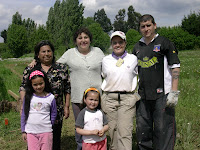 as very cool. Some people wanted to talk, some people just wanted to be near everyone else on the team. It had been a very overwhelming day.

Una and I realized... if we hadn't decided to do a Habitat trip, or hadn't picked Chile or hadn't convinced 14 other people to come with us, those families would still be waiting for the additions to their houses. When people come together to work for a common good, they really can accomplish great things.

Saturday morning, we had the last reflection, led by the jefas. We did an excercise where people brought items that symoblized the trip for them and put them in a circle. You had to pick up an item and talk about it... the trick is, you couldn't pick up your own. Una and I threw in random things like a headlamp and a converter and still, everyone was able to pick an item and use that as a talking point to say what they got out of this trip. Yes, there was more crying. It's all good stuff. 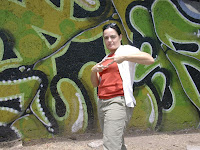 We had the team celebration lunch, which included bent nail awards (I am "Jefa La Compactadora") and singing a song I wrote to the tune of "Copacabana", called "Hogar Bautista". John was the inspiration when he sang the first line.

Back up to Santiago in the evening and much of the group was on their way. The rest of us met for dinner.

Sunday, we couldn't find any protest so Una, Alison, Amy and I hung out in Santiago. (We did shake our fist at the American Embassy as we drove by in a cab) We sent more people on their way Sunday night and by dinner time it was just Una, Alison and I - Las Chicas Superpodersas - that would be the Power Puff Girls.

Monday we took a bus into Valparaiso and got lunch at a cafe recommended by Lydia (it was fabu, thanks!) We took acesnsores up hills and down hills and walked around. And here we are.

Is it hard to be a jefa? Yes. Is it wonderful to introduce other people to the magic of a Habitat trip? Yes. Would I do it again? Let me know what you're doing in Spring of 2006 and start your research on Kyrgyzstan. 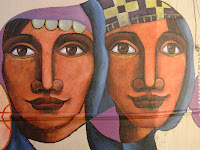 CNC machining can also be|can Novelty Shower Curtains be} a perfect methodology for manufacturing aerospace half prototypes. Viewing the 3D image on a pc allows the engineer to test the part’s functionality and make fast changes if essential. Once finalized, engineers can begin the CNC machining course of for speedy half manufacturing. The transition from particular person to mass manufacturing of parts for the aviation or aerospace trade turns into easy with the use of of} CNC machines all through the process.