Ah, we had a Chilean coup of our own just now. The women took over the men´s shower while 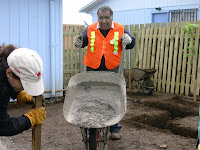 they were down the street drinking cerveza - ah ha.

So we}re two days into the work now. I have become queen of shovelling rocks. Why? My wheelbarrow skills have improved but they are still not as good as other peoples. We are digging out the foundation for 7 houses. Once we{ve dug out all the dirt, it{s a lasanga of big rocks, cement, big rocks, cement and then people start tamping. I have taken to shouting out Tamp On, Tamper! This is a bad habit. I also shout when people get their pick on. We have some very enthusiastic excavators. 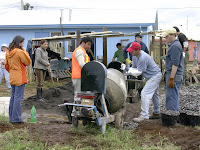 Many of us now own very fashionable plastic yellow rain suits. It{s better than getting wet, because we only stop working when it rains really hard. We were amusing the Chileans standing under a shelter while it was raining singing Singing in the Rain and MacArthur Park.. someone left a pala - shovel - in the rain...

What else. Una and I have to meet with directors of the board and all sorts of people because we are the first brigade and everyone is stopping by the worksite to say hello. We are the jefas. Every night we have a jefa conference to find out who on the team is driving us nuts - and they are, blanche, they are. The main jefa of 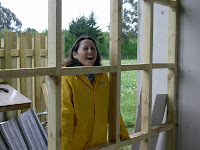 the site is a woman named Paula who is a civil engineer. She gets to boss around the maestros. She is very friendly and we all love her.

I spent the bus ride home learning words in Mapudungun, the language of the Mapuche. My brain gets as tired as my muscles sometimes. Okay the carpal tunnel is kicking back in and there{s a line so I{m going to sign off.

Also... we{re all very sad to hear about the election. Booschwin. That{s what Gabriel, one of the homeowners told us and it seems to be true. He will be in Santiago on the 14th and so will we. If

I{m late coming back to work it{s because we went to protest with the Chileans and I{m in a Chilean jail somewhere. Send bail money.