It's the last Feel Good Friday in Pride month and it's election season so today I'm highlighting the "only national organization dedicated to electing openly LGBTQ officials", Victory Fund. 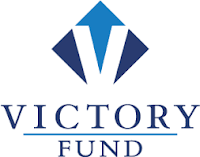 Victory Fund was founded in 1991 with a mission "to change the face and voice of America's politics and achieve equality for LGBTQ Americans by increasing the number of openly LGBTQ officials at all levels of government."

Candidates are given strategic, technical and financial support. In addition, endorsements from Victory Fund help increase the candidates' exposure to potential donors.

These methods work. In 1991, the first candidate Victory Fund ever endorsed won her election. Sherry Harris became the first openly lesbian African American city council member in Seattle. Since then, Victory Fund has helped over 600 candidates win elections all across the country! You can read more of their success stories on their history page and visit this interactive map to view 2019 election results.

Victory Fund wants to ensure the LGBTQ community has a voice at the table and there are many ways you can get involved to help them. Search this list of current candidates to see who needs your vote in November. Support multiple candidates with a donation to Victory Fund.

You can also join a virtual Sunday Social on June 28th to hear elected officials discussing the impact of LGBTQ leadership and how current events will influence their decision making.