Today, Feel Good Friday is going to the oceans to learn about the Algalita Marine Research Institute. 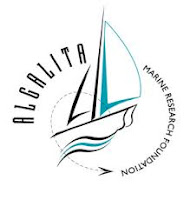 I first heard about Algalita during my interview with ocean rower, Roz Savage, which you can watch here.  Their mission is stated on their website: "Algalita is dedicated to the protection and improvement of the marine environment and its watersheds through research and education on the impacts of plastic pollution."

Odds are (since you read this blog) that you've heard of the North Pacific Gyre, also known as the Great Pacific Garbage Patch. It's an area of "plastic soup" in the Pacific Ocean, twice the size of Texas, first discovered by Captain Charles Moore, the founder of Algalita. It was that discovery that changed the focus of the organization in 1999 from restoring disappearing kelp forests to focusing on plastic pollution.

The problem with plastic is that it biodegrades extremely slowly and in the process it breaks down into tiny fragments that fish and other sea creatures mistake for food. It not only kills marine life but also threatens the health of the oceans. That's why "Algalita has worked tirelessly to give the ocean a voice through our in-depth research and education programs. Through everything we do, we illustrate how every individual can be part of the solution."

Steps you can take include advice you've heard before: reduce, reuse, and recycle your plastic. Algalita also adds research and education to the mix. Research efforts include a South Pacific Expedition, a retrospective on the North Pacific Gyre as well as plastic, pollutants, and wild life studies. Education opportunities for youth are FREE and include annual international youth summits, STEM workshops and presentations for the classroom, and Debris Science Investigation Kits, which are geared for grades 6-12 but I still want one.

You can watch a short intro video of Algalita here and check out more videos on their channel. If you want to support their work you can do that by making a donation, buying some merch then liking the Algalita Facebook page and following them on Twitter