What does today's Feel Good Friday organization have to do with the Fourth of July? Absolutely nothing. Let's move on.

You may know of the Sea Shepherd Conservation Society (SSCS) from Whale Wars on Animal Planet, however, I just learned about them from a friend. 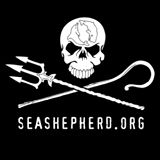 As stated on their website SSCS is "an international non-profit, marine wildlife conservation organization. Our mission is to end the destruction of habitat and slaughter of wildlife in the world's oceans in order to conserve and protect ecosystems and species."

Established by Paul Watson in 1977, "Sea Shepherd uses innovative direct-action tactics to investigate, document, and take action when necessary to expose and confront illegal activities on the high seas." They have a variety of campaigns focused on whales, turtles, sharks, seals, sea lions, dolphins, reefs and bluefin tuna. Current efforts include Operation Jairo II, protecting sea turtles in the US, Costa Rica and Honduras and Operation Milagro II, a campaign to defend the endangered Vaquita Porpoise in the Sea of Cortez. Details and videos can be found on their campaigns page.

You can support the work of Sea Shepherd by making a donation to a specific campaign or the organization as a whole. If you're good on the water you can crew at sea on one of their campaigns or if you're prone to get queasy you can volunteer onshore with a chapter near you.

Other ways to get involved are to like their Facebook page, follow them on Twitter @SeaShepherdSSC and buy clothing and other items with their bad ass Jolly Roger logo! That's my kind of direct action.