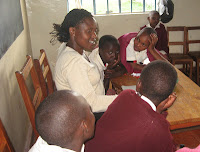 I had never heard of her until I watched her TED Talk yesterday. In the event you don't have 18 minutes to spare, let me sum up because you need to know this woman.

As is typical of a young Maasai girl living in Kenya, she spent her childhood helping her mother with very labor intensive tasks on the family farm. She was engaged at the age of 5 and expected to marry after she hit puberty. While going to school she decided that she wanted to become a teacher because they wore high heels, looked pretty and writing on a blackboard seemed to her like easier work than gathering firewood. 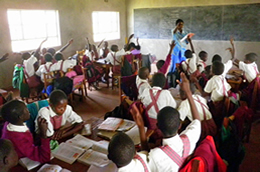 As she neared puberty, the expectation was that she would participate in the traditional coming of age ceremony for a woman (female circumcision) and then get married. Kakenya knew this would thwart her plans of becoming a teacher so she made a deal with her father. She would go through with the ceremony if he would let her finish high school rather than drop out and marry.  Her other option of running away would bring him shame so her father agreed!

Flash forward to her meeting a Kenyan boy who had gone to school in the US - giving her the idea to do the same, her application and acceptance to college in the US and an introduction to new ways of thinking. Not wanting other Kenyan girls to be circumcised, forced to marry and have to forego their education, KaKenya went back to her village after graduating to establish an Academy for Girls called the Kakenya Center for Excellence (KCE).


The school serves the area's most vulnerable and underprivileged girls and focuses on academic excellence, health education, female empowerment, leadership and community development. Each year a new class of 30-35 girls is enrolled in grade four. With the January 2013 incoming class, the school has reached its full capacity, housing 155 girls in grades 4-8 in a safe, nurturing environment. The campus currently includes 5 classrooms, a dormitory, a computer lab, a kitchen, and staff housing.

KaKenya's dream is that KCE will serve as a model for the development of other extraordinary schools for girls throughout Africa.

If you've made it this far and have 3 minutes more, you can watch this film which summarizes her story. Happy International Women's Day!