Team Lordy Lordy participated in the 48 Hour Film Project this weekend and I'm happy to report, we turned in our movie with a
few minutes to spare!
On Friday night at 7pm, the team gathered at Danny's house and waited for the call from Jarie with the information we'd need to get started.  All the movies shot in SF as part of the project this year will have to include the following elements:

Character: Gus or Gloria Lorenz, Trade Expert
Prop: bus, plane or train ticket
Line of Dialogue: "Forget it.  I already have."
Each team then draws a genre from a hat.  We ended up with "comedy"!  It's a bit scary when you have to make your film funny, but it's not half as scary as trying to make a "historical fiction/period piece".

After brainstorming what in the world our movie would be about, Alex, the main writer got to the task of writing a script.  We shot on location at a bar in SF called The Transfer most of Saturday morning and into the late afternoon.
Saturday night and Sunday were spent logging tapes, editing, reshooting some footage, running the movie to a musician who scored the film, and then a down-to-the-wire adding of credits, transferring the movie to dv tapes to submit and speeding through the streets of San Francisco. 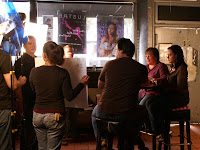 Were the nights with only a few hours of sleep and the stress of the last few hours of the project worth it?  Of course they were.
See the fruits of our labor for yourself by attending the screening this Wednesday at The Roxie in San Francisco at either 7 or 9:30! Get your tickets here.
And for those of you who missed Lordy Lordy's 48 Hour Film Project debut in 2006, you can see the film we made then by going to 48.tv and searching for "The Cure" (the San Francisco movie).  That year's info was:

Character: Mark or Margo Plantagenet
Prop: pillow
Line of Dialogue: "When are you going to clean up this mess?"
Genre: mockumentary
We won "best prop" that year and once you watch our movie, you won't have to ask why.
Posted by Miss K at 11:32 AM