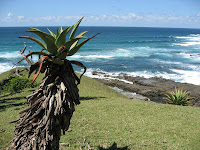 That's Xhosa for "hi y'all". (When you are pronouncing Xhosa, please to be clicking where you see an X.) Of course, I've learned some Xhosa just in time to head to Zulu country where it will no longer be that useful but I try.

My time in Coffee Bay was filled with nature, culture and rugby. Last Saturday, I went on a 3.5 hour hike along the coast, up hills, over rivers, seeing dolphins, sheep and cows on the beach and eventually ending up at the Hole in the Wall - a rock formation where the sea comes crashing through, yes a hole in a big rock wall. The scenery was amazing, which made a good excuse to stop and rest.

Later that night I went with some people to a Xhosa village where we tried some home brewed beer. If you take any beer you may have and add milk and handful of grass from your lawn, that's about what it tasted like. Women in the neighborhood danced in one of the houses and we all joined in at 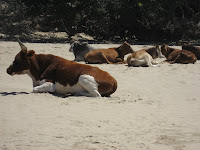 the end - a very fun time. The next night, I spent the night in one of the people's houses. It was fabulous and boring all at once and I spent most of my time singing with the girls in the family.


The last two days in Durban have been divine, as people here are fond of saying. Monday I met up with the filmmaker who I met at a party in Cape Town. She and I met for lunch and were filmed by a local film crew that the Dream Team sent. The conversation was fabulous and I learned that she started doing the work she does with limited formal training... there's hope for me yet.

Next, the crew and I went to the Victoria Street Market to film an 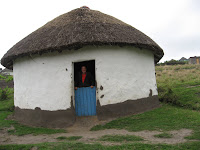 interview with me then ask random people to tell us about their dreams. People were very reluctant to talk on camera that day but when I went back today to do some souvenir shopping... people couldn't stop talking to me. It was actually wonderful to hear from locals about life in Durban and how they also want to see more positive portrayals of Africa.

All that and I met a woman who made wildlife documentaries who thinks that a travel show focused on community tourism and social responsibility type issues is a good idea. Catch the 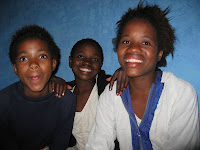 wave while you can.

I fly out a week from today and I can hardly believe it. I've been thinking a lot about recent conversations I've had with people about the impact you have on others when you're following your dreams and especially about an exchange I had with a woman in Cintsa.

On my last morning there, I went for a walk on the beach. In the distance I could see about 5 whales breaching, sticking their tails out of the water and generally having a good time. I saw a couple on the beach who was also watching them and we stopped to talk. I told the woman, I'm not sure what the whales are thinking but to me, they look very happy. She said, "Of course they are, they're doing what God made them to do." Her husband replied, "Shouldn't we all?" Well, yes. 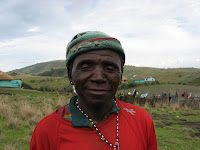 So my message to me and to you is... figure out what you're meant to be doing and do it. It will make you happy and that will have a positive impact on the people around you. I've had a wonderful time chasing this dream of mine around Africa and I'm expecting wonderful things to happen as I start chasing it back to San Francisco.