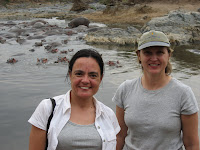 This is just one of the factoids I've learned on my safari, after having a tse tse fly picked out of my hair and shown to me. Yeah!

Tracy and I are back, we are clean (unlike most of the trip, especially at the smelly hippo pool on the left) and we are in a hotel with running hot water on demand - this is the life! Rather than bore you with a chronological recap of, at Ngorongoro we saw a lion, then we had mushroom soup for lunch, I offer below a random assortment of safari snippets. 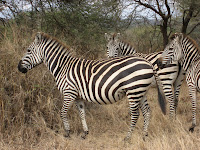 1. Bare-faced go away bird
2. Red-billed fire finch
3. Hoopoe
4. Tropical Boubou
5. White-headed buffalo weaver
6. Lilac-breasted roller
7. Common drongo
8. African pied wagtail
9. Cinammon-chested bee eater
10. Kori bustard
Camping in the Serengeti (at right is our campsite)
I knew I crossed the line from beginning to intermediate camper not when I went 4 days without washing my hair, not when I peed in a water bottle in the tent while Tracy rolled politely to her side, but when I layed in my sleeping bag without crying as the pack of hyenas swarmed past our tent on their way to a kill. 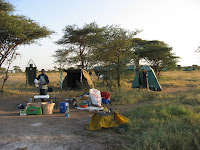 None of this would have been possible without Tracy's guidance on acceptable standards of camp grooming, tips on using a bottle as a bathroom and reassurances that the hyenas were just saying hello to the lion we heard. When a lion roars in a zoo at feeding time, it's exciting. When a lion roars 600 feet from your bed at 4:30am, it's a little disconcerting. Welcome to camping in the Serengeti.
After two hours of laying in bed trying to figure out who, exactly, was out there and what was going on, Emmanuel (our guide) asked if we wanted to go see. Still in our pjs, we grabbed headlamps and cameras and got into the Land Cruiser. 600 feet behind our camp, a camp, mind you, where it was only the two of us plus our guide and cook, we saw dozens of eyes reflecting in the headlights. A pack of over 30 hyenas were fighting over the remains of a wildebeest some lions had killed only a few hours before. By the time we arrived, all that was left was a head and a spinal cord, which were quickly separated in the fray. 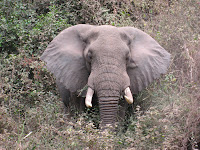 We watched the hyenas as the sun rose and were too absorbed by the spectacle to hear Sule (our cook) whistling for us. Back at the camp, two lions that had been irritated away from the kill by the laughing of the hyenas were stalking him! He threw rocks at them to scare them off and showed us their pawprints in the dirt when we returned. Knowing he was okay, we headed down the road to the turnoff for our campsite. There, in the grass, were 5 lions lounging about as if nothing ever happened, completely disinterested in the 8 jeeps full of people taking their photos.
Melodramatic? Yes - and I have video footage of snarling hyenas to prove it's true. I was quite happy to leave the Serengeti behind and head for Lake Manyara. 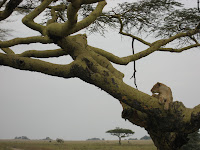 Disclaimer: For those of you who know Tracy, she may have a slightly less dramatic version of this encounter, however, if pressed, she would admit that the events took place "more or less" as described above.
Communication Issues
(In the Serengeti) Heading towards the kopjes, I saw an ostrich egg at the side of the road and said so. Although I maintain there was a note of disbelief from someone, Tracy says that my 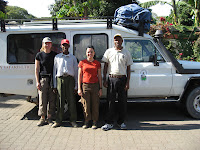 comment, "seriously dude" was unprovoked. Whatever. Once she saw it, she commented, "That's a big one, eh?". We can't escape where we come from, yet we're doing our best to bridge the California/Canada divide.
Lastly, no matter how many times you hear it this way, there is no plant in the Ngorongoro Crater called whore's wipe. In fact, the plant is known as horse whip or devil's tail. Now you know.
Posted by Miss K at 3:30 AM

Sleeping in a tent with lions and hyenas macking down outside sounds scary. Keep close to guide my friend!
John

The whole thing sounds horrifying to me- not washing hair for 4 days, peeing in a bottle AND hyenas! I would never make it. You're my new hero.
Michelle

I found this site using [url=http://google.com]google.com[/url] And i want to thank you for your work. You have done really very good site. Great work, great site! Thank you!