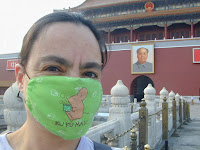 Monday, I went to the Forbidden City. Opted not to get a tourguide and used my guidebook and the signs to get around. Again, there were not very many people and I had lots of time to marvel, take photos, sit down and wander aimlessly wishing I had a guide to tell me what was what. The place is huge (so huge it has a Starbucks inside - seriously - and yes, I think that should be forbidden) and, if you had to be the Emperor of China and holed up somewhere, it was not a bad place to be ho 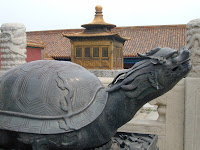 Same for the Summer Palace. Went Tuesday sans guide and wandered around in temples and gardens and along the lake. Saw a boat made of marble and the grand stage where Emperess Dowager Cixi used to hang out and watch the opera. I'd tell you more about her if I could but...

Tried to go to one last temple but it was closed. Turned out to be good as I then went to arrange a tour to the Great Wall and spent an hour walking up and down Jianguomen Beidajie like a Macau 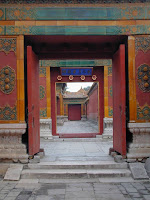 hooker, trying to get a cash advance on the visa to pay for the tour and the hotel. Lordy.

Only one section of the Great Wall is open (Badaling) and police or local people prevent you from getting to the others. So I went today with the only option available to me - a private driver and private tour guide! It was really too much. But the guide was really friendly. She was the agent who set up the trip and usually she doesn't lead tours but she called some guides in their early 20s and their parents wouldn't let them do it. She is in her 50s and said even her mother-in-law asked her, "Aren't you scared of the girl who has been traveling all over China?", to which she replied, "Well, she's not scared of me and I'm from Beijing." And thus, an aliance was born.

We were two of very few tourists on the Wall. It was great, indeed. We spent 3 hours and were able to walk along two different sections. I took far too many pictures which I will have to edit 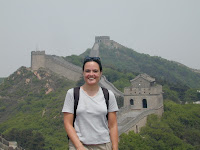 then share. The wall follows the mountain like a spine or a snake laying across the top. It is pretty amazing to see.

After that we went to the Ming Tombs and even though they were only open for 10 more minutes, the ding dong people sold us a ticket then started closing everything. Sigh. I had told the guide while we were on the wall that I felt like a diplomat but the only thing I was missing was the secret service. Ask and ye shall receive. At the tombs... because we were supposed to be heading to the exit, not wandering around, two uniformed security guards started following us. The guide told me, "here are the guards just for you". It was funny. 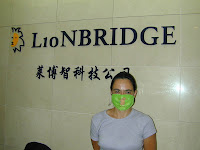 Oh and the other day, I visited the Lionbridge office in Beijing (close to where I'm staying). The site manager was not there but everyone was really nice and they showed me around and I stayed there almost an hour talking with people. Very cool.

I will meet the Germans again for dinner tonight and then run home to pack as I found out my flight time changed and now I must leave tomorrow morning at 9:00. I guess this means no pickled corpse of Chairman Mao for me. ;(

Should be home Thursday afternoon and will start downloading all the pictures. After laundry. Because, lordy lordy, laundry really needs to be the first thing on my list. 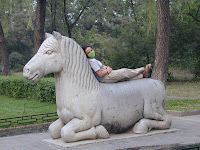