Well, I am in Beijing on the last leg of my journey... hard to believe it's almost over. 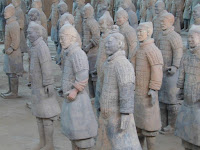 I spent the last two days in Xi'an. "In defense of SARS" many things were closed and there were no organized tours (to help you see the spread out sites) so I had to take a bus to the Terracotta Warriors and get myself another private tourguide (a tourguide for money, do what you want me to do).

While there are usually 20,000 visitors to the site per day during this time of year, I counted 6 plus myself. Now I know what it must be like to be a foreign dignitary and have sites closed down so you can tour them alone. Anyway, there are 3 pits of warriors with the first one being most impressive. 6000 warriors in total, though only 2000 are uncovered right now. They are mostly destroyed and a team of 20 archeologists puts them together by site... taking 6 months for each one. Should be finished up 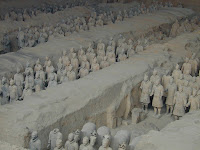 in the next 40 years. They are very detailed with different facial expressions, uniforms and fingernails (well they have fingernails that is). Wild.

Oooh, plus, the poor dudes who put the warriors in the pit. Because the emperor wanted it to be a secret, they had to get shut in with the statues when it was all closed up. As did the concubines that didn't bear any children, which is I'm not sure how many out of the 3000 concubines homie had. 3000! Lordy.

Later, I putzed around in Xi'an proper, which has an excessive number of clothing stores and an 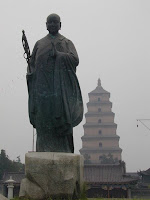 While there I went to Dayan Ta (Big Goose Pagoda). It was cool and I climbed to the top but I think I'm getting templed out. I also stumbled into this I don't know what but ended up walking down two long, dark, cold hallways which at times were guarded by statues of men with multiple arms, holding snakes and grimacing (and of course sort of in the dark so I started freaking out... too many horror movies). At the end was I think the crypt of Xuan Zang, this monk who translated all these scriptures he brought from India, but I could be makin' it up. I just know there was money and cigarettes thrown in front of it, it was guarded by lions and I was convinced the gates would close and no one would hear me scream (and cue music). It was spooky so I left but I still have no idea 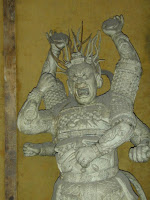 In the evening I went into the Muslim quarter to walk around and get dinner. I was feeling like a dork because I ate breakfast at McDonalds and lunch at KFC (all sad but true) and stopped chosing food at a Chinese restaurant the day before because I saw "nutritious beef penis" on the menu and was afraid I might point to it by accident. Moving on.

Outside the restaurant, people were grilling up, what I beleive was lamb and possibly beef. I looked at the menu, which had English on it, and pointed to "sweet smelling and crispy chicken" thinking I would get some kabob-like thing. As it was hard enough to explain that "yes I wanted the chicken" and "yes I wanted rice, but only one, yes both but one of each" I didn't think I could ask how the chicken was prepared. Too bad. Crispy = dry, almost to the point of being unrecognizable if it wasn't for the head which remained on the plate. This is why I should only eat at places where you can point at a picture. I will never mock Denny's again.

This morning I flew into Beijing, went to an antique market and then wandered over to Tiananmen Square and watched people fly kites for awhile. I am getting good and lollygagging around. This way I will be able to leap into action when I am home. 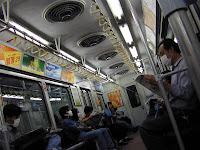 Tomorrow night, I will meet the Germans from Yangshuo for dinner and try to figure out if the Great Wall is closed, which is what I hear but that makes no sense. Though, that doesn't mean it isn't true.

Since the internet is in the hotel, I should be able to check in once again before I head for home in a few days.

See most of you soon!