Today’s Feel Good Friday is a celebration of what happens when young activists leverage the power of social media. Introducing Gen-Z for Change. 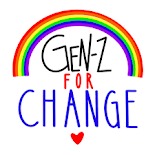 If you haven’t seen this news story, in a speech earlier this week, Florida Representative Matt Gaetz, made some disparaging remarks about abortion rights activists and used Twitter to target 19 year-old Olivia Julianna. As a political strategist with Gen-Z for Change, she responded to his attack by starting a fundraiser for 50 local abortion funds across the United States.

The original fundraising goal was $50,000. At the time of writing this post on Thursday night, Gen-Z for Change has raised over $1.3 million! In a fundraiser that started just 4 days ago! Who are these amazing people?

Gen-Z for Change, formerly known as TikTok for Biden, was started by Aidan Kohn-Murphy as a coalition of TikTok creators using their following to defeat Donald Trump. In their own words, “we are a youth-led nonprofit working to educate our generation and create tangible change on issues that disproportionately affect young people.”

Gen-Z for Change leverages the power of social media to do their work in a way only Gen-Z can. They produce multimedia content on a variety of topics including climate justice, free and fair elections, gun safety and indigenous rights. (See the full list of issues they support here.) The content they produce is used to educate young people, encourage and mobilize civic participation, shift the political debate, and enact change.

With over 500 content creators, 540 million followers and 1.5 billion monthly views, Gen-Z for Change has galvanized thousands of people to take down anti-abortion whistleblower tip lines, mobilized over 850 calls to Congress in support of the Build Back Better Act, and hosted over 700 people to send 250,000 texts during the Georgia Senate races. They are proving that digital organizing works and you don’t have to be Gen-Z to get involved.

To support the abortion fundraising efforts mentioned at the top of this post, visit Gen-Z for Choice Abortion Fund. There you can see a list of the 50 funds that will split the money, check in on the total funds raised and make a donation.