Well, hello. I skipped last week’s post (accidentally) because I got very involved in Zoom Thanksgiving AND adopting kittens! Today’s Feel Good Friday is dedicated to the agency that put us together, San Francisco Animal Care & Control. 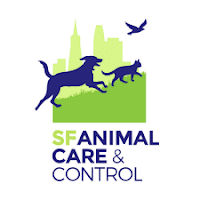 Established in 1989, after taking over the contract from the SFSPCA, San Francisco Animal Care & Control (SFACC) is “San Francisco’s only open-door animal shelter that accepts any animal – in any condition – of any temperament. SFACC is responsible for the City’s stray, injured, abandoned, neglected and mistreated animals – of all species – and wildlife.”

When SFACC says any animal, they mean it. Cats and dogs, of course, but also farm animals, exotic pets and less traditional domesticated animals like rats, hamsters, rabbits, chickens, chinchillas, reptiles, and pigeons. Many of these animals are available for adoption. If you’re looking for a pet, you can see your options using this link. Because of COVID, you aren’t allowed in the shelter and will meet your potential new housemates via Zoom. I was dubious but it works well, and it is very 2020. You can also turn to the SFACC website to check the lost and found for animals, learn about behavior training or find out what to do if you encounter a coyote.

Once you own a pet (not a coyote), SFACC can help you with licenses and permits, microchips and vaccines, spay/neuter services and, if needed, lost and found and humane euthanasia. On that note, while animals that are too injured or sick to survive are euthanized, SFACC saves a very high percentage of the animals that come through its doors: ~85% (compared with a 35% national average).

Animal rescue services are provided by animal control officers who also investigate cruelty, neglect, and aggressive animals in SF communities. If you have access to the Discovery Channel, you can see them in action on a show called “Animal Cops San Francisco”!

Love what you read about SFACC and want to know how to help? If you live in the Bay Area, you can sign up to foster animals, adopt animals, or volunteer. No matter where you live, you make a donation, and amplify their work by liking their Facebook page and following them on Twitter @SFACC. 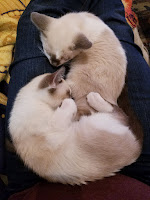 Perhaps it was the fact I picked them up during the Thanksgiving weekend, but I’m very grateful to SFACC for bringing these two kittens into my life. Feel Good Every Day!
Posted by Miss K at 9:00 AM