Feel Good Friday - Be An Elf

Thanksgiving is over so it's officially okay to make this Feel Good Friday post about Christmas and tell you all about Be An Elf. 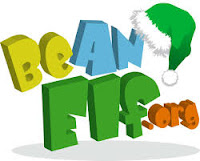 Be An Elf was started by Hans Dohm and Patrick Reynolds in 2004 with a mission "to make more underprivileged children smile on Christmas morning, and to inspire people with the real spirit of Christmas." They started by handing out presents to children who had written to Santa, now they help other volunteers adopt letters to Santa and mail gifts. Be An Elf works in conjunction with the USPS's Operation Santa (which I wrote about here) to promote their program and recruit volunteers.

In previous years you had to pick up a letter from a post office in a participating city. This year, children's letters to Santa will be made available online so people can adopt a letter from anywhere and mail gifts from 19,000 postal branches.

Families can also go to the Be An Elf site to read tips on writing to Santa and increasing the likelihood of their letter being adopted: tell the truth; ask for basic needs first; bundle letters of siblings into one envelope so volunteers can adopt the whole family and use Santa's address - 123 Elf Road, North Pole, 88888.

If you still have questions you can check the FAQs. If you need some inspiration, read these letters from previous years.

When you're ready to get into the Christmas spirit, there are three main ways you can support the program:
Letters to Santa should be mailed no later than the 14th so volunteers have time to shop, and gifts need to be in the mail by the 20th to ensure an on-time delivery.

This program depends on volunteers like you so be sure to spread the word by liking the Be An Elf Facebook page and following them on Twitter @Howtobeanelf. Ho, ho ho!