This week a policy change was announced that would weaken the Endangered Species Act. That's why we're highlighting a Feel Good Friday organization dedicated to protecting these animals and their habitats, Defenders of Wildlife.

As summarized on their website, "Founded in 1947, Defenders of Wildlife is the premier U.S.-based national conservation organization dedicated to the protection and restoration of imperiled species and their habitats in North America." 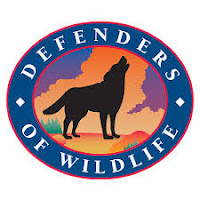 All of their programs focus on one of these three broad imperatives:

You can check in on what Defenders is doing for individual animals or an individual place by viewing the wildlife or wild places sections of the website to find your favorites. One example is getting the voluntary tax donation check-off box put on tax forms for the California Sea Otter Fund and warning signs put on flushable kitty litter because it's harmful to the sea otters.

Other programs focus on: conserving imperiled species, advocating for international species, protecting wildlife habitat, promoting coexistence between humans and wildlife, defending conservation laws, innovating for wildlife conservation (science, meets technology, meets policy), and combating climate change. Whew! You can read details about these programs and blogs on current efforts at the "our work" section of the website.

Ready to fight for those who can't fight for themselves? You can help protect the Endangered Species Act by filling out this short form to write your Representatives and visiting the action hub for other ways to get involved.

You can also support the work of Defenders of Wildlife by making a traditional donation or adopting an animal (and getting a photo and a plush toy of the animal you adopt). Finally, don't forget to share the social medial love by liking their Facebook page and following them on Twitter @Defenders.
Posted by Miss K at 9:00 AM