The past week has not given us a lot to feel good about. The murder of 11 people in Pittsburgh's Tree of Life Synagogue is what inspired today's Feel Good Friday organization, Bend the Arc. 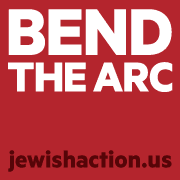 After the 2016 election, I wrote about the Anti-Defamation League and their fight against anti-Semitism. Clearly there is more work to be done.

As explained on their Facebook page, "Bend the Arc's political advocacy arm harnesses the collective power of progressive American Jews to change policy and build a more just and equal nation."

You may have seen them in the news recently because they organized a unity march during Trump's visit to Pittsburgh and sent him a letter demanding he and the Republican Party:

As of Thursday night when writing this post, 85,163 people had signed the letter - you can add your name at this link.

Standing with communities under attack, whether Jewish, Muslim, or immigrants is one of the ways Bend the Arc resists the current administration and political climate. They also mobilize to win progressive legislation and polices. Current campaigns include fights for racial justice, immigration reform and economic equity.

On their website, Bend the Arc provides tools and resources to help you organize a phone bank, rally, or letter writing event and instructions on how to hold a town hall meeting. If you live near one of their 15 locations nationwide, you can volunteer with other people in your community to make a difference.

At times of tragedy, it's easy to get discouraged, especially if you don't live close enough to provide immediate assistance. What helps me is supporting organizations that are fighting the good fight on behalf of the people who have been affected. If you'd like to support Bend the Arc you can do so by signing the letter, volunteering, donating and spreading the word on social media by liking their Facebook page and following them on Twitter @jewishaction.

One more action you can take... #vote.