Happy day after Thanksgiving! Many know today as "Black Friday" and spend their morning running  from store to store to get the super bargains. For me it's still a Feel Good Friday and here's why - Giving Tuesday!

The day is meant to counterbalance Black Friday and Cyber Monday's focus on consuming and celebrate the holiday season by giving. Although this is only the third year, the idea is catching on and now over 10,000 organizations worldwide participate. Non-profits create unique goals, corporations double employee matches, individuals find ways to give what they have whether that's money or time. Last year the city of Baltimore set a goal of becoming the most generous city in the United States and raised 5.7 million dollars in one day! 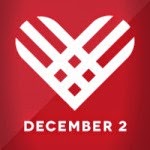 Not sure how you can get involved? There's an entire tools page with case studies on giving, tool kits, ideas, examples and videos. You've got the whole weekend to figure something out!

This campaing has a huge social media focus so while you're coming up with your Giving Tuesday goal, be sure to like their Facebook page and follow them on Twitter @GivingTues. Once you've got a plan, let the world know by using #GivingTuesday in your posts. The best part of this is you don't have to get up early or stand in line to participate. Now that's a tradition I can support!