Well, so much for the pressure of being followed leading me to more frequent updates.  But hey, I've got some for you now and here they are!

I submitted a shorter, more clear version of the Bushman film to the Palm Springs International ShortFest, which takes place in the middle of June.  I'm going down there whether or not the film makes it in.  Utah in the winter, Palm Springs in the summer?  Extreme temperatures is just how I roll!

Two other Scary Cow films that I produced continue to make the film festival rounds.

The Magic Man has been in Hill Country (that would be Texas), Boston, and New York!  I haven't been traveling with this film since Utah but all is going well.  To stay updated, the Facebook page is your best bet: https://www.facebook.com/themagicmanfilm.

Kethron's Bucket-Mending & Hymen Emporium has been accepted to festivals in Connecticut and Mumbai.  Mumbai!  Unfortunately I won't make either of these but I wish this film well.  Updates can be found on this Facebook page: https://www.facebook.com/ketherons

In non film related news, my friend Roz Savage is about to embark on a two person row from St. John's in Newfoundland to England so they get there in time for the Olympics!  It's the Olympic Atlantic Row and you can follow their progress here.

I was lucky enough to see Roz, Mos and Bojangles (their boat) at an event in San Francisco before they left.  The boat had been docked at the Hyde Street Pier undergoing repairs and preparations for the journey.  Some final touches were being made on the streets of San Francisco outside the event. 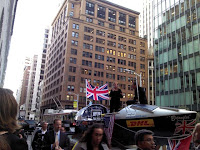 After some snacks, networking and gin & tonics (how British!) all that was left were speeches by the boat. 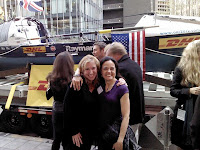 Well that and photo opportunities for the fans...


Meanwhile, I'm trying to figure out what step comes in between the films I made in Africa and a desire to buy a camera and plane ticket to Colombia for more of the same.  There have to be local people and groups I can film with a small crew before I get kidnapped by the FARC or end up in a hotel full of secret service and hookers.

All ideas are welcome.
Posted by Miss K at 9:44 PM

I've got top men working on this for you. Top.men.

Nice to hear from you! I will give you a call before my next international flight. (Sunday so there's a deadline!)
Xoxo