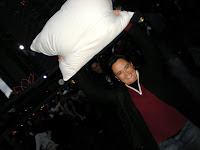 Thousands of people gathered in Justin Herman Plaza in San Francisco on Valentine's Day to whack each other on the head with pillows.  Really.  How could I not go?
In preparation for the big event, my friend Danny and I went to two Targets and a Kohls looking for feather pillows but they were all sold  out!  At least the ones priced under $30. That's what we get for waiting until Saturday afternoon to go shopping.  We settled on  some crazy fiber filled pillows in the hopes they wouldn't burst open and made our way downtown. 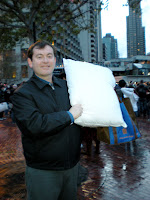 There were a ton of people with pillows: some in pjs, some wearing bandannas like train robbers, and some with little kids on their shoulders.
As the clock on the Ferry Building chimed 6:00 people raised their pillows over their heads and with a shout of "They can take our pillows but they can never take our freedom!" began whacking at each other like they were moles at a county fair.
In the middle of the plaza it was too crowded to get a good swing - and being short it was very easy for people to whack you on the head.  After swinging my pillow at random strangers for awhile, I moved to the edge of the crowd where the sensation of imminent trampling wasn't as strong. 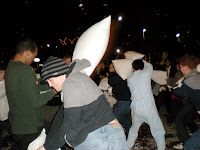 We broke off into a splinter group which had formed a circle creating a feather-filled Thunderdome of sorts.  "Two men enter, one man leaves!"  It was much easier to run in and out of the fight that way and make sure you didn't lose an eye.
After an hour, the fight was still going strong, but we had breathed in enough feathers for the evening and both had places to go so we left. 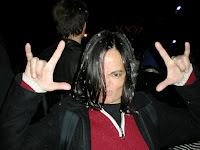