Life on the Edge at Victoria Falls

First off... if you haven't read about the Mazingira Monkey Project, go back one blog and find out what it's all about. 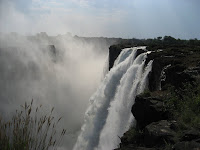 Now back to our regularly scheduled program.

I arrived in Livingstone, Zambia on Tuesday the 18th, checked into Jollyboys and promptly got ready for the sunset cruise with my friend PJ to celebrate her birthday. We saw hippos, elephants and a lovely sunset - which I'm sparing you the picture of because I know you've seen enough.

The next day we got up and went to Zimbabwe - like you do. It's the dry season and the water is low. Can't see too much from the Zambia side, but the main falls on the Zimbabwe side are still pretty spectacular - I'd love to come back and see them in the wet season. 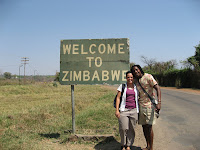 We were met by a guide named Taka, who I had met in Lusaka... sounds like a lot of potential for a limerick in there... he took us to the falls and then exchanged money on the black market so we could get lunch. The notes they use are not actually money but a "bearer cheque" with an expiration date of July 31st, 2007. However, since they've got nothing else to use, people still use these expired cheques. Apparently if you take money out of the ATM you get 250 Zimbabwe dollars for 1 US. On the black market you get 50,000 or so Zim dollars for 1 US. I still don't really get it, but people travel to Zambia, take Zambian Kwacha out of the ATM, exchange it for US dollars in Zambia then go back into Zimbabwe and exchange the US dollars on the black market. Crazy. That and no one calls Mugabe by name, because there are so many undercover police watching what you say... they just refer to him as "Him". I've got more stories but we must get back to the falls. 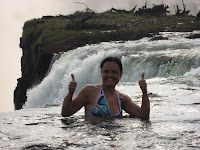 Yesterday, PJ and I went for high tea on Livingstone Island. Before you have your tea and cakes and gin and tonics, you get to swim at the edge of the falls. Literally. I refused to jump in - the guides were doing flips - but I did crawl down and swim to the edge. I was then persuaded to look over the edge while the guide held my feet. I think some people lean waaaay over. It was all I could do to stick my head over, spread out my hands then say "okay, okay I'm done". It was kind of like climbing to the top of the lighthouse at Alcatraz and touching the top. Although I was scared to do it... if that's the volunteer initiation, I'm not missing it, but I'm going to do it as quickly as possible. 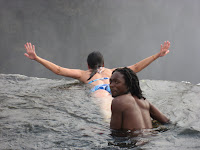 Afterwards, I sat in pool a bit lower down that was like a jacuzzi. You could hold on and stick your head over and watch the water rushing by. It's hard to imagine the water of the Zambezi, which seems so calm if you watch it from the deck of the Royal Livingstone Hotel (which we did after the high tea with a lovely couple we met from the US) turns into the churning mass of water that tumbles 108 meters (yeah, I don't know how many feet that is, 300?) into the gorge below. How do those hippos hold on?

Tomorrow I catch an 18 hour bus (can you stand it? I can't, but I will) to Windhoek, Namibia. When I arrive Monday morning, I'm joining up with a safari to go to the sand dunes on the coast. I may even try sand boarding - then again maybe not. Stay tuned.

The following Friday, I catch the second leg of the bus (another 18 hours) to Cape Town. I'll be back in South Africa and on my last country by next weekend! It's hard to believe it's already been 3 months. While in Cape Town, I'll have to find more things to film for my travel show demo. I've felt a little off track with that lately so it's time to focus (does anyone else hear Myriam's French accent?), especially since there will be a film crew from Dream following me around for 2 days!! It's exciting people... and you've been with me the whole time.

Thank you for that.
Miss K 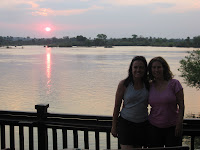 PJ and I enjoy the sunsent from the deck of the Royal Livingstone Hotel before heading back to the dorms. More on dorm life in another blog... it's like being back in college but having 7 roommates. Lordy.
Posted by Miss K at 6:15 PM

So my brain was saying "She posted this blog. She obviously made it." while my heart was racing "No she didn't!" as I looked at the picture of you over the falls. You've got more guts than I do, Gunga K.

Jambo FCKR!
I've just caught up on the last month of your life and i can tell you that it's a little more exciting that what's been going on in mine! Can't wait to connect with you when you get home. Should i have my Uncle John greet you at the airport with his accordion rendition of 'California Here I Come' as he did when I returned from studying abroad? Just let me know and we'll be there! FCUK