Kickin' It In Kenya

Downtown Nairobi reminds me a lot of downtown San Francisco - people in suits on cellphones, signs in English, coffee shops everywhere - EXCEPT... everyone is African, the cars drive on the opposite side of the road and the homeless people tell you they are refugees from Sudan. Otherwise, same same.

It's Monday now and I'm here through Thursday morning. After meeting with some employees of Habitat 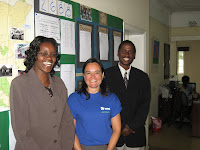 Kenya and interviewing them on video, I learned that a Global Village team will be returning from their build on Tuesday night. So, I'm staying at the guest house where they will be staying, essentially stalking them in the hopes that I can get more interviews before heading to Uganda.

I spent the weekend with the friend of a friend of a friend and it was great. Life for the people working at any of the embassies or the UN involves a lot of gates, guards and golfing but is otherwise much like life in the US - driving your kids to their friend's house, going shopping and ordering pizza for dinner. I was shepherded around all the sites in Nairobi... animal orphanages, elephant orphanages, giraffe center, Karen Blixen's house/restaurant, cultural dances. It was fabulous, though now it leaves me with not much to do over the next few days but to hang out at coffee shops.

I'm now at a guest house full of missionaries. It's not laughing hyenas that makes me put my earplugs in but loud evangelizing on the tv in the common area. Oh well. It's right next to a shopping center and certainly seems safe. This morning I was on a bus downtown (so proud of my first use of public transit) when I heard that the police had already shot dead 4 potential robbers in separate incidents in the city this morning. I'm not quire sure how reassured I feel about that.

In any event, I did accomplish my main mission of the day. Getting a bus ticket to Kampala - I splurged for the bus with air conditioning but we'll see. The bus from Arusha was supposed to have it too but they only had air on the condition that you opened the window. I also booked a bed in the dorm at a place in Kampala where I will hang out until my gorilla tour: http://www.redchillihideaway.com/index.htm They help with other sightseeing and I have high hopes of meeting other solo traveler's there.

I'll post this now but try to add the picture of me petting the (tame? drugged?) orphaned cheetah when I get back to the Gracia guest house. 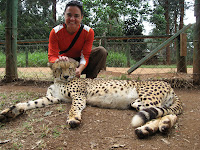 Thanks for reading and I'll try to check in before I head to Uganda.

Where you channelling Tippi Hedren whilst petting the cheetah? Shambala, my friend.

Poor Cheetah!.. looks fun. off to chicago for the weekend. Ciao amiga.